Dwight Howard Speaks For First Time About Death Of Kobe Bryant, Says Kobe Had Agreed To Help In Dunk Contest 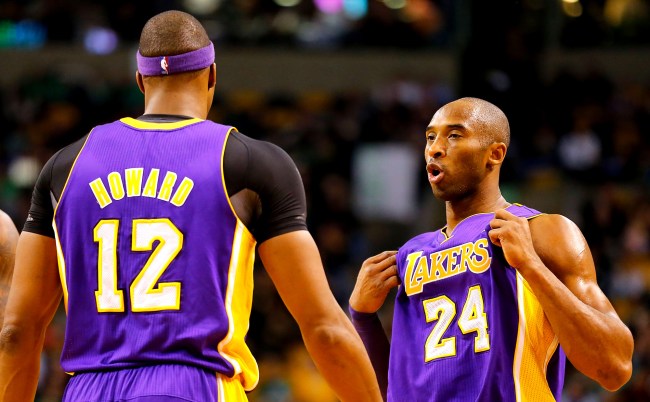 For the first time since the death of Kobe Bryant, his former teammate and sometime nemesis Dwight Howard spoke publicly about what the NBA legend’s passing meant to him.

Following the Los Angeles Lakers defeat of the San Antonio Spurs on Tuesday night, Howard spoke to the media about the shock of The Black Mamba’s passing.

“I was extremely hurt,” Howard revealed. “Yean, it really hurt me bad. I didn’t know what to do or say, but I was extremely hurt. Still kind of lost for words. It doesn’t seem real that it happened. I never expected in a million years we’d be talking about Kobe passing away.

“Yeah, it was very sad. There were nights where I just cried myself to sleep just thinking about it, and it still hurts to this day. It’s kind of hard to talk about it, because I just get these overwhelming feelings from it, but he meant a lot to a lot of people, as you could see from the love around the world that everybody received and how hurt everybody was. You know, I could tell that people were deeply saddened.”

Howard added, “It was just really hard. For me, a lot of people thought that me and Kobe hated each other and stuff like that, and there were times we just didn’t understand each other, and I didn’t get a chance to tell him how appreciative I was for our time together and how thankful I was to be back here in L.A. and stuff like that so… that was pretty hard for me. I took it pretty hard.”

Howard previously admitted to FS1’s Kristine Leahy when discussing the time he and Kobe butted heads over him being “soft” that “I think at that time I was ignorant to the level that he was at. So I appreciate you, Kobe. Thank you for saying I was soft. I didn’t realize what you meant until now.”

The Lakers big man also revealed Tuesday night following the Spurs game that Kobe had already agreed to help him in the dunk contest.

“He was going to do something for me in the dunk contest, which is just kind of heartbreaking,” said Howard. “It’s been on my mind every day. Man, I can’t believe it. I’m still in shock. It hurts. It’s tough. I just never thought that somebody like that would be gone.

“And it’s something that, you know, I just tell people, if you have any bitterness or anger, whatever, strife towards anybody, let it go. Let them know how you feel. Get those feelings out. Let them know because you never know what could happen. Life comes and goes just like that. For me, it’s super sad because I really wanted to tell him how much I appreciate everything he’s done, all the things he’s said. Even at the time that we were on the same team, we didn’t understand each other, but I saw a different Kobe, and I even saw a change in myself. And I’m pretty sure he saw it. I just wanted to be able to tell him how I felt about him, and I never got the chance to. That was really the most heartbreaking part. Every day it’s been on my mind. It’s something that I’ve just got to deal with, just show the fans in this city that I’m willing to do whatever it takes.”

That poignant statement is very similar to what Howard said the night before Bryant was killed in the helcopter crash – the night LeBron passed Kobe on the NBA all time scoring list – when he prophetically told reporters, “We don’t appreciate each other as much as we should as humanity. Something like that should be appreciated. We should appreciate people while they’re alive, and accomplishments like that is something we don’t typically see.”