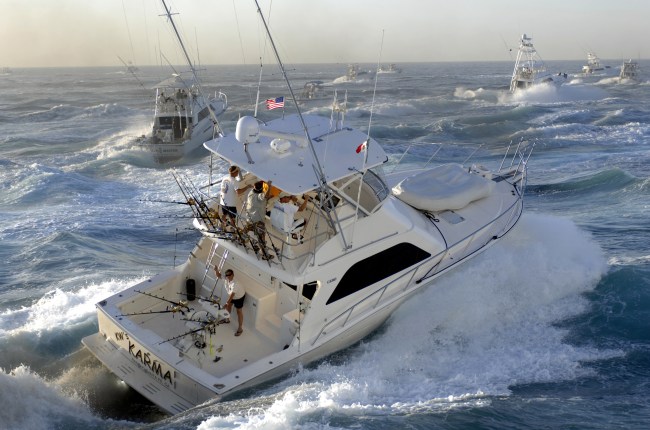 It took nearly a week into the six month of the year before the first ‘grander‘ was caught worldwide in 2019. Every year is different. In 2018, it took ONE DAY before the first grander was landed, a 1,089-pound Blue Marlin caught off Exmouth, Western Australia.

This year it took 154 days into the calendar before a boat successfully landed and weighed a grander. The 1,040-pound Blue Marlin was caught in the Cook Islands aboard the Tamahine and it was landed by angler Cameron Thorp.

If the Cook Islands don’t ring a bell then chances are you’re an American like myself and haven’t had the chance to travel to the other side of the planet yet. I do remember from grade school geography that the island chain is somewhere in the South Pacific and they speak English there, after a little Googling I just learned that 81.3% of the Cook Island residents are Māori, and residents are all citizens of New Zealand.

Why am I droning on about these islands? Well, this grander blue marlin was landed there and as we enter Summer the Southern Hemisphere is entering Winter. These MASSIVE Black and Blue Marlin follow the cool water currents around the globe along with other pelagic/free roaming fish.

As the weather cools down in tropic/sub-tropic areas, the fishing heats up. Every year the marlin fishing in Hawaii GOES OFF in the Winter, also in The Azores in the Atlantic.

The angler battled this 1,040-pound Blue Marlin in the Cook Islands for FIVE LONG HOURS. I once fought a Blue Marlin for 90 minutes and thought my arms and legs were going to fall off. There’s literally no shot in hell I would’ve made it five hours if that fish didn’t come to the boat (thankfully, it did).

According to this report from the New Zealand Herald, the first three hours were a back and forth battle with the fish while the second two hours was a miserable fight against dead weight. The fish died during the battle, most likely from exhaustion, and the angler had to reel in over a thousand pounds of dead weight for two long hours.

“You are always hoping to win but you never know your luck,” Thorp said.
Hauling the fish in was a battle that spanned hours.
It was fine for the first three hours, when the fish was actually swimming, but when the fish died it became a real struggle, he said.
“With a fish that size you sort of give up. You think there is no chance anymore,” he said.
“We were fishing in deep waters. When they go, they just keep going down.”
In the end mates who were also out fishing – Papa Buckley, Buckley Jr and Thorp’s brother Kieran – helped the pair haul the hefty marlin onboard.
The fish hit the deck on Thorp’s 20 foot Poti Marara style boat, which he built by hand himself, under a car port with the help of a few mates.
Thorp said he had the utmost respect for the massive fish and felt that most importantly the catch had “put our little island on the map”.
“It’s gone viral online and a lot of people have never heard of this place,” he said. (via)

This is kind of amusing to me but I actually shared a picture of this fish last week in one of my ‘Best Damn Photos’ daily meme and picture roundups. It was from the Fishing Raratonga Instagram page, a personal favorite of mine for the vibrant colors of the pictures they share. At the time, I 1) assumed the picture was fake and 2) had no idea it was the first Grander of 2019 but here we are.

The Fishing Rarotonga Facebook page shared a CRAZY LONG status about fighting this fish and hauling in the first grander of the year:

How does this compare to previous granders we’ve seen here at BroBible? Well, you can tell by the weight (1,040-pounds) that this one is obviously on the smaller end. It’s just 40-pounds over the grander mark but it is 100% still the FISH OF A LIFETIME for these anglers.

If you’re curious as to how big these marlins actually get? This 1,117-pound Black Marlin was the first grander of Australia’s season last year. This 1,095-pound Blue Marlin HAD A SAILFISH inside of its stomach. This 1,245-pound Blue Marlin measured longer than 12-feet!!!

I could do this all day. Aside from Grander Watch, which reports on each grander catch with the weight of the fish and the date it was caught, BroBible has the best and most extensive marlin fishing library that you’ll find at any non-fishing-magazine on the Internet.

As always, you can hit me up on Twitter at @casspa if you want to send a fishing story and some pictures my way!