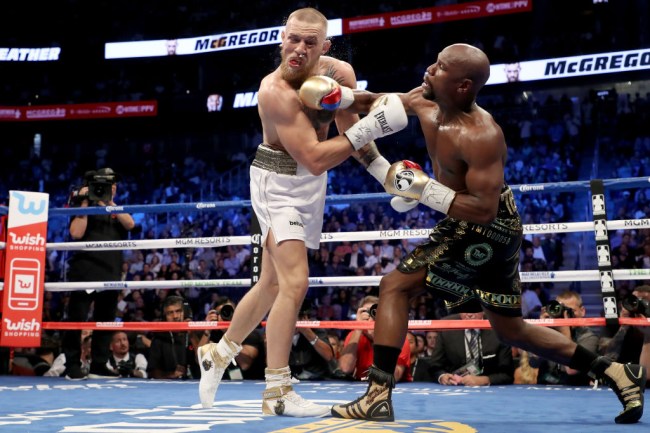 It’s hard to believe it’s been over a year since Conor McGregor and Floyd Mayweather faced off in the most hyped boxing match in recent memory— a fight that ultimately ended after McGregor shifted to an ill-advised strategy that involved getting punched in the face a bunch.

The match was the culmination of months of back-and-forth between the two fighters, including what might have been the best thing to come out of the entire saga: McGregor’s custom pinstripe suit.

That suit worn by @thenotoriousmma …look at what it says. #MayMacWorldTour. The 'Fuck You' suit is custom made by #DavidAugust in Los Angeles.

McGregor is slated to return to the Octagon and face off against Khabib Nurmagomedov at UFC 229 in November in his first MMA fight in two years and there’s been speculation that it might only be a matter of time until Mayweather eventually faces off against him in the cage at some point in the future.

On Tuesday, the fighter decided it was time to reignite the rivalry with a tweet taking aim at Mayweather.

Fuck the Mayweathers, except Senior and Roger.
There is no peace here kid.
Step up or step down.

As you’d expect, Mayweather was quick to respond.

Easiest 9 figures I ever made! All work is what ? #MayweatherPromotions#TMT#TBE pic.twitter.com/32WGa78AHV

However, he wasn’t done there.

He followed up his response with another tweet where he hijacked the #WCW hashtag to encourage his fans to contribute to a “Whoop Connor [sic] Wednesday.”

#WCW “WHOOP CONNOR WEDNESDAY”
Everyone following me…repost this, come up with your own creative caption & tag me. Thanks in advance! pic.twitter.com/4R3FizyW65

The only problem? Mayweather posted the tweet on Thursday morning.

As you probably know, there is nothing people on the internet love doing more than calling someone out for being an idiot, and this was no exception.

Him checking the calendar for the right day pic.twitter.com/vFqZOpC4sB

I wish I had enough money to not know what day it is.

In fairness, that last guy kind of has a point.

When you’re the highest paid celebrity in the world, it’s not your job to know what day of the week it is. However, you should 100% have a guy in your entourage whose only duty is to keep track of that.

As a result, this is just inexcusable.