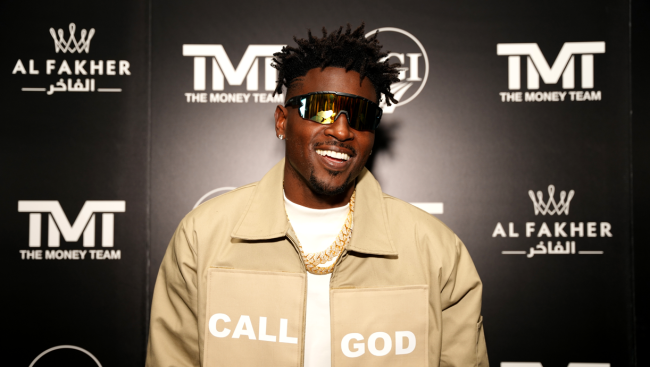 Antonio Brown, who has been a member of three different teams since leaving Pittsburgh after the 2018 season, is currently unemployed. Boxing legend Floyd Mayweather wants to help his pal get another job in the NFL and he says he is willing to pay for it.

When he’s actually been on the field, AB has been very productive. In those 16 games, he has caught 91 passes for 1,084 yards and 9 touchdowns. It’s just that he hasn’t been on the field very often.

Floyd Mayweather obviously thinks his buddy AB can still get it done, however, and is willing to put his money where his mouth is.

Speaking to The Pivot podcast, Mayweather said, “I think AB is really misunderstood. He just want to be treated fair. And this is for any team that’s watching right now. We’ll make them a deal. If they sign AB and AB go through the whole season no problems at all, and then they got to give us $20 million, but if he mess up then we’ve got to give them $20 million. So if any team want to match that, you know, reach out to us.”

Since being benched for skipping practices leading up to the Steelers’ Week 17 game in 2018, Antonio Brown has been signed by the Raiders and never played a down before being run out of town, signed by the Patriots who cut him after one game, suspended for the first eight weeks of the 2020 NFL season, signed with the Buccaneers and played in 15 games in two seasons before having a complete meltdown on the sidelines during a game and being cut.

And that was the the ON the field stuff. Off the field, Antonio Brown has been an even worse mess with controversy and after controversy, including several lawsuits.

So, while Mayweather’s offer appears on the surface to make signing Brown a no-lose situation, not many NFL fans believe (a) it will actually happen, especially since Brown needs ankle surgery and (b) that AB won’t go off the rails again, costing Mayweather $20 million.

Since AB "messed up" at least five times, (PIT, OAK, NE, TB, and the off the field stuff, etc) you need to come with 5:1 odds brah! AB messes up, you pay $100M and if he stays straight, you get $20. You think a billionaire is going to risk his NFL baby on a proven wack job?

The articles and exhibits in that contract that clearly define “mess up” better be this long. pic.twitter.com/UioIuXlOuX

Easiest 20 million a team could make

Steelers need to jump at this deal, they can use the 20 million to pay Minkah