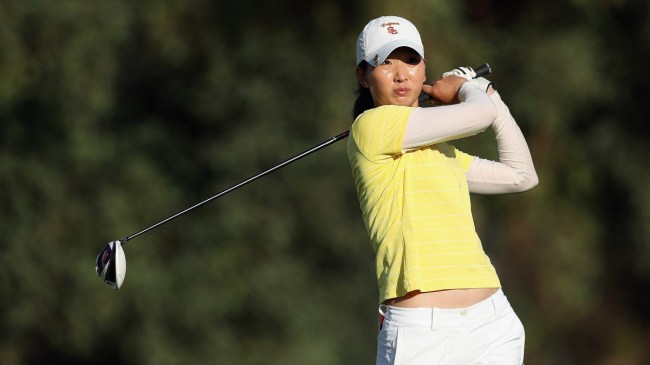 Moms… gotta love ’em. Even when their “helping” you out completely backfires and makes your life worse. Right? Yeah, well, what if your mom killed any chance you had of qualifying for the pro golf tour? Because that’s what happened to former NCAA golf champion Doris Chen over the weekend.

At the inaugural LPGA’s Q-Series held at Pinehurst Resort in North Carolina, 48 golfers earned their LPGA status. Chen, the 2014 NCAA individual champion at USC and the 2010 U.S. Girls’ Junior champion, was not one of them, in large part thanks to her mom.

Why? Because her mom, Yuh-Guey Lin, reportedly moved her golf ball from out-of-bounds to in-bounds and Chen went ahead and played it anyway.

“Doris Chen’s drive on the 17th hole in round 7 came to rest out of bounds,” said the LPGA in a statement. “An outside agency moved her ball back in bounds. Ms. Chen and her caddie were made aware that the ball had been moved. Doris elected to play the ball, which was a wrong ball by definition, from its altered lie. Ms. Chen did not correct her error before teeing off on the next hole, thus resulting in the DQ penalty.”

Never heard a mother called “an outside agency” before.

GolfChannel.com reported that “a homeowner along the course who was watching the event observed the infraction and provided a description of the woman he saw moving Chen’s ball” who was later identified as Chen’s mom.

“I did not have any direct involvement, nor was it my intention for it to happen. It was a stressful week and I did my best in terms of resolving it at the moment. Unfortunately, I did not have the best judgment at the moment and this resulted a ruling. It was my responsibility as a player to call for a rules official at the time to investigate, whether the event to be true or mistaken. However I thought I knew the rules clearly. I have to firmly clarify that my caddie, the volunteer nor I at the time who were searching for the ball saw anything of suspicious. I did not hear or see anything, nor did I do anything that would interfere. I found the ball and hit it. With this I regret that I could not do anything of help.”

With God’s grace I decide to move on. Please respect my privacy. Thank you. pic.twitter.com/O79JcdKVON

Chen said she did not know whether the homeowner accurately saw what happened, because the home was below a small incline where the ball was found. Chen said she chose to play the ball because she believed even if the ball was kicked, it was “still a live ball” and should be played where it lies. She also said she remembered watching TV years ago when something similar unfolded, where a fan moved Tiger Woods’ ball and Woods was instructed to play it where it lies.

Chen said her mother, Yuh-Guey Lin, was following her that day, but her mother was further up ahead on the hole and wasn’t witness to the conversations taking place.

“My mother said she didn’t move the ball,” Chen said. “She doesn’t know what happened.”

Chen said she felt pressure during all of this, because her group was on the clock and rushing to get back in position.

“Apparently, the homeowner told the LPGA later that the ball was moved from out of bounds to in bounds,” Chen said. “I swear to God that is not what she told me. My caddie was a witness. He heard it.”

Her caddie for the event, Alex Valer, tells a different story, however. He says it was Chen’s mom who announced she discovered the ball. Then a woman came running from out of a house, telling them the ball had been moved by Chen’s mother.

Valor then says he told Chen to consult with an official, warning her that she could be disqualified, but she declined. Later, Valer said Chen asked him to keep quiet about the incident, but when LPGA rules officials questioned him, he told them what he knew.

After that revelation, Chen disputed his story disputing her story.

God knows what happened and he oversaw https://t.co/il2q2O5kUl caddie did not tell me to call r.o. I had a conversation about this with him afterwards. I understand as a caddie wants to protect himself. I don’t want to make any more comments as I’ve said all I need. That’s it.

Man, who knew women’s golf could be filled with so much drama? A story like this would fit right in with the NBA.