Greg Olsen Predicts Whether Or Not Seahawks Will Trade Russell Wilson 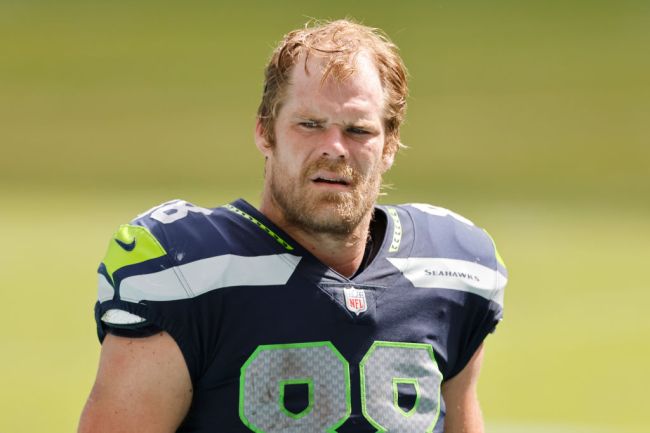 When the Russell Wilson trade rumors first began, most interpreted them as, well, rumors. It sounds preposterous that Seattle would trade Wilson away – because it is – but multiple drops of gas have been tossed on that fire over the past few weeks.

The rumors started when the Seahawks elected to fire offensive coordinator Brian Schottenheimer. Wilson reacted by taking his frustrations public and voicing his displeasures with the media. Then, toward the end of February, The Athletic reported that Wilson presented Seattle with a list of potential trade destinations which includes the Saints, Dolphins, Raiders, and Jets.

Putting two and two together, why would Wilson present Seattle with a list of preferable trade destinations if he’s happy?

Greg Olsen, a former teammate of Wilson’s, weighed in on the rumors and predicted that Wilson will remain in Seattle.

“I think that’s pie in the sky,” Olsen told Colin Cowherd. “I don’t think Seattle, you can’t take those odds. If you’re taking the odds today, he’s back in Seattle. They fix the things that they both agree on that needs to get better to push the organization forward.”

If you’re going to put it into a betting perspective as Olsen did with Cowherd, then yes, I think most would agree that the best odds would be for Wilson to stay with the Seahawks. But, this is the NFL, and crazier things have happened.

The only way the Seahawks do deal Wilson is if he truly is unhappy, trading him away could set the franchise back years. A good sign for Seattle fans is that the situation hasn’t turned into what we’re seeing in Houston between the Texans and Deshaun Watson. Until Wilson really comes out and says he wants out, odds are he’s staying put in Seattle.