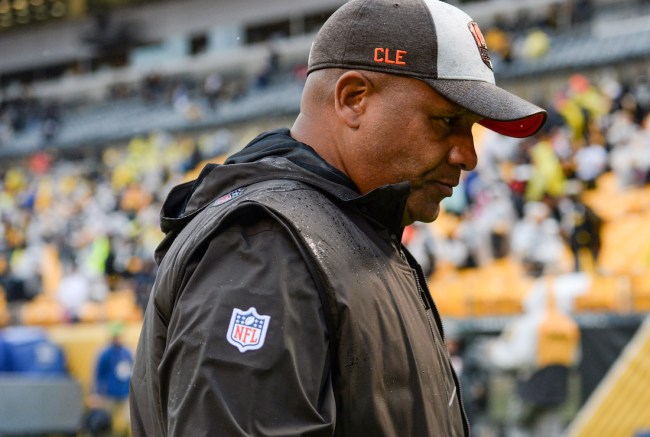 Without a doubt, Hue Jackson was the worst head coach in Cleveland Browns history. As a lifelong fan of the franchise, I’m qualified to say that, right? I think so, because, during his 2.5 seasons at the helm, Jackson went a pitiful 3-36-1 overall, never able to competently lead the locker room to anything more than a couple No. 1 overall picks. Awful.

The separation between Jackson and the Browns seems to still be weighing on the guy, with the 55-year-old continuously blasting the organization since he was fired midway through the 2019 season. From having a little rivalry with quarterback Baker Mayfield, to candidly dissing the franchise after they fired him, it’s clear that Hue Jackson feels like he got a raw deal. Forget the fact that he won three games as head coach, though. Sheesh.

Jackson’s latest gripe with the Browns’ organization came during a recent interview with ESPN 850 on Monday, with the former head coach claiming that the team’s owner, Jimmy Haslam, secretly offered a contract extension after going just 1-23 in his first two seasons. Hue also added that Haslam refused to let the extension go public, and, ultimately, says he was lied to by ownership.

“I got a contract extension at 1-23, midway through the season,’’ Jackson told The Really Big Show on ESPN 850. “I wanted to go public with it, but the Browns didn’t.’

A source told cleveland.com that the extension was for one year, which went through the 2020 season.

“There’s no doubt I was lied to by ownership and leadership of the team,’’ Jackson said. “They were going to be football plus analytics, but it was football vs. analytics.’’

As for why he praised Cody Kessler on draft day, he said, “You think I didn’t know who that player was…was I happy with that pick? Absolutely not. That’s what analytics drafts.”

If the Browns really did, in fact, give Hue Jackson a contract extension after guiding them to a 1-23 record in his first two years, then the franchise is even more pathetic than I first originally thought. Sure, things have turned around since hiring Kevin Stefanski during the 2020 NFL offseason — with the team reaching the postseason and winning a playoff game — but, still, what on earth was Haslam thinking by handing more money to Jackson a couple years back? It’s just insane.

As for Jackson, he continues to come across as a jealous ex, who whines about no longer being part of the Browns’ life. Sure, some of his stories and/or claims probably have merit, but get on with your life already, buddy.