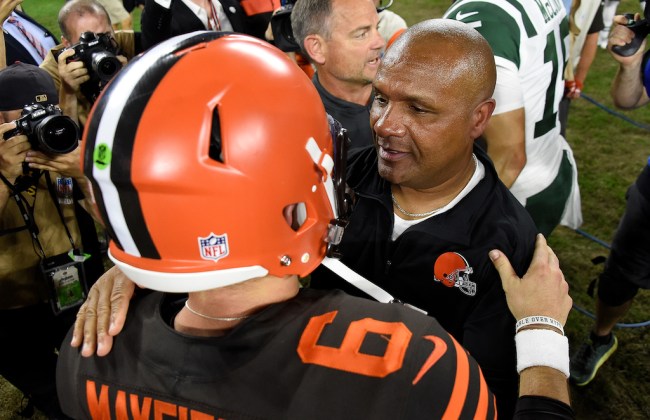 My Cleveland Browns are 4-2 and competing for a playoff spot, so the last thing on anyone’s mind is Hue Jackson — a former coach who (somehow) “led” our proud franchise to an 0-16 record during the 2017 NFL season. While Jackson wasn’t exactly given a competent roster full of much talent, the fact that he couldn’t win a single game is pathetic, and speaks to how bad he is as a head coach.

Don’t get me wrong, the dude knows football, is a decent offensive coach and seems like a pretty good guy, but, sheesh, even when the Browns’ starters were playing backups in a Week 17 matchup against the Steelers during that fateful 2017 season, Jackson’s team couldn’t steal its lone victory. Embarrassing.

Hue Jackson’s tenure with the Browns didn’t exactly end on good terms, with the team firing the guy midway through the 2018 season after handing the keys to the franchise over to then rookie Baker Mayfield, who was the No. 1 overall pick that season. Side note: Mayfield wasn’t reportedly who Jackson wanted, but, instead, the choice of former GM John Dorsey.

Well, now that Jackson’s had some time away from football, he’s apparently writing a book that’s expected to expose the entire Browns organization, detailing some of the things he saw while with the franchise. That’s according to Jake Trotter, who covers the team for ESPN.

Hue Jackson, on @ESPNCleveland, says his book, which evidently will cover his tenure with the #Browns is still coming out next year. "It will be a best-seller… I promise you that."

“I think this story needs to be told,” Hue says, of his time with the #Browns. Won’t give any details, though. https://t.co/lSXfzUYmSb

More vagueness from Hue on the #Browns: "What I saw. What I experienced needs to be known.” @ESPNCleveland https://t.co/lSXfzUYmSb

Hmm… interesting. Does any Browns fan really care much about what Hue Jackson has to say? I, for one, do not. Maybe I’m in the minority here, though, and there are some folks who can’t wait to get some of the dirty details told by a head coach who went a phenomenal 3-36-1 during his 2.5 seasons at the helm. Remember, this is the same guy who joined the Cincinnati Bengals after being fired, so it’s not like he doesn’t appear to have bitter feelings towards the way it ended in Cleveland.

And, just because Jackson isn’t at all missing the fact that the Browns now have talent and are actually looking like an NFL team these days — well, most of the time — he couldn’t resist telling Trotter how the team’s current coaching staff should be treating Mayfield.

More Hue: “Baker has not played as well as people think he should. To defend him a little bit, I think Baker is not playing in a system in my mind that showcases his talent and ability. … You take away from who he is anytime he has to go under center.” @ESPNCleveland #Browns

More Hue on Baker: “There’s a lack of confidence. And they need to get that back. And to me, that is the biggest job of the coaching staff the rest of the season…(more below)” #Browns pic.twitter.com/q2p9o3J6WG

I needed a good laugh today, and the news of a Hue Jackson book about the Browns definitely gave me one. The fact that he also felt it necessary to add some advice for the current coaching staff about how to manage Mayfield is even more hilarious. And the bitter state he still seems to be in for no longer being the head is, well, sad. You had your chance, Hue. You failed, so time to move on.