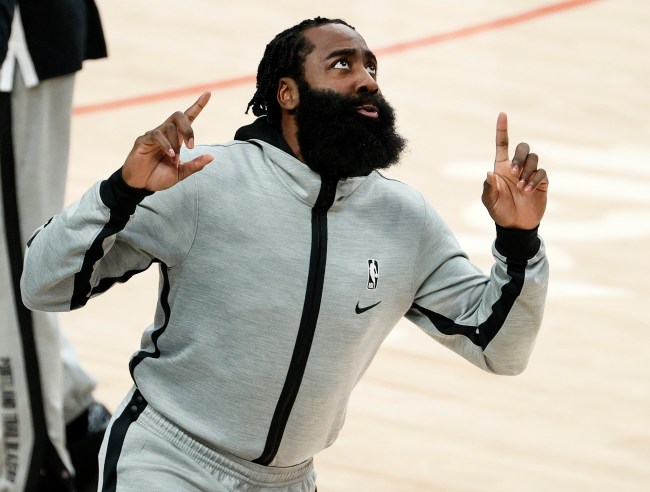 The James Harden trade to the Brooklyn Nets on Wednesday sort of rocked the entire sports world. It’s not that it actually happened — there had been signs that it was coming all the way back in November — but the fact that it went down just a mere 12 hours after the one-time league MVP blasted the Houston Rockets publicly before walking out of a postgame interview following a loss to the Lakers. Like, seeing this happen so quickly makes you wonder why the Rockets even wanted to put up with the Harden headache for even a few games this season.

Anyways, now that James Harden got his wish and he’s set to play alongside friends Kevin Durant and Kyrie Irving — assuming the latter doesn’t do something else to make some even call for his retirement — it’ll be interesting to see how this all goes down. Three superstars with a combined 24 All-Star appearances and three NBA titles between them, it’s easy to think this video game-like roster will dominate the rest of the league. Of course, we’ve seen this story before, and we know nothing’s a given; even when you have the best players together on the floor.

Given their personalities and ball-dominating styles, will this new Big Three for the Brooklyn Nets actually work? Will the three butt heads and cause tension? Who will get the final shot when a game’s on the line? And how will first-time head coach Steve Nash handle all of this without feeling overwhelmed? Nobody knows the answers, but one anonymous NBA scout did offer up a warning sign when asked.

Talking to the New York Post, the scout said this pairing of stars could, ultimately, “go up in flames” should the three mega-stars don’t make adjustments to their games. Citing worries about Harden and Irving meshing on the floor together, here’s what the scout had to say.

The scout is most concerned with chemistry between Harden and Irving.

“It’ll be a work in progress,’’ the NBA scout said. “You have literally and statistically two of the five most ball-dominant guys in the league. I watched Houston with John Wall and Harden, and maybe it’s because of the issues, but that didn’t look like a comfortable environment for Harden with Wall dominating the ball. Then you have Durant who I wouldn’t say is ball dominant but certainly needs a lot of touches.’’

“The dynamic between Harden and Irving is the key,’’ the scout added. “Durant can adjust. At Golden State, [Klay] Thompson was not a guy who required the ball. Fewer touches were required for that big 3. Defensively they got worse. Harden doesn’t guard. And they lose [Jarrett] Allen.’’

No longer individuals, James Harden needs to figure out how to facilitate more. Kyrie Irving needs to learn how to play off the ball more. Kevin Durant just needs to be the leader of the entire thing. That seems to be the sentiment among some of the scouts and former front office people that the New York Post talked with.

One of those former executives was former Wizards and Hawks scout Bryan Oringher, who didn’t beat around the bush when describing the Nets’ new situations with James Harden.

“It either goes up in flames terribly or they win multiple titles.’’

There’s a helluva lot of pressure on the Brooklyn Nets to win now, as all three superstars are signed through next season, with each holding a player option for the 2022-23 NBA season. Not old, but not as young as they were a few years ago, the clock’s ticking on the franchise to win a championship in the next couple seasons. But one NBA agent said the new trio has their work cut out for them.

“There’s just as much potential for this to go awry as it is to go right,’’ the agent said. “You got Kyrie, who can be a loose cannon. You got Harden, who just called out his team and teammates. And you got KD who seems on the surface very passive but he likes to let a lot of things fester and talk about it after the fact like in Golden State.”

It’s an interesting dynamic in Brooklyn, and one that NBA fans will keep a close eye on. Not only did the Nets just get a helluva lot better with James Harden, but they also just became public enemy No. 1, and will get every team’s best shot each night. We’ll have to see how the three handle such external and internal pressure.