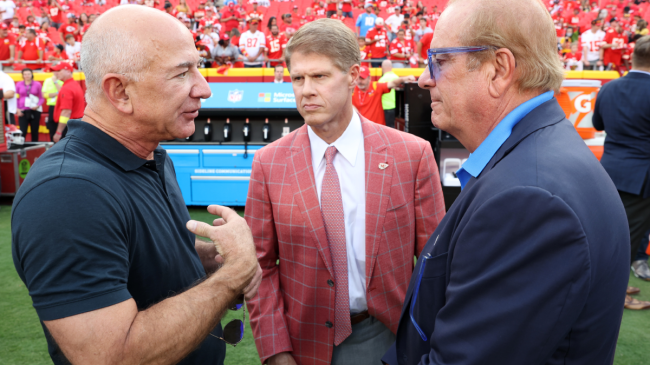 Amazon owner Jeff Bezos was on hand for the Thursday night matchup between the Chiefs and Chargers. The entrepreneur is in attendance as this marks the first NFL game aired strictly on the Amazon Prime format.

Prior to kickoff, Bezos made his rounds to visit media, teams, and fans. One now viral photo caught the attention of folks on social media.

Jeff Bezos is here at Arrowhead for the debut of #TNFonPrime pic.twitter.com/6NbNxtezpm

Bezos was seen posing for a photo with a few Chiefs fans before the game. One minor detail in that picture caught the eye of folks on social media.

Bezos is awkwardly holding the hand of one attendee as though he’s either never given a high five or handshake in his life. He’s really just holding her limp wrist up as if it’s some sort of prize.

Fans online have immediately come to the conclusion that Amazon owner is, in fact, a robot.

Bezos has a fascination with robots, previously having been seen wielding Dr. Octopus arms, building rockets, and piloting 13-foot automatons. Many believe that comes from something deeper than curiosity, though.

This latest photo has given the world more evidence of that theory. Take a look at the reaction on Twitter after seeing that viral photo.

One fan wrote, “Super awkward robot hand hold,” while another commented, “As always, being extremely normal.”

Media personality Ashley Nicole Moss posted, “This hand situation is uncomfortable,” in response to the uber creepy handshake (if that’s what you want to call it).

this hand situation is uncomfortable 🥴 https://t.co/umzpQH63Cd

Other fans chimed in with their hilarious responses, with this person joking, “They haven’t programmed the Jeff Bezos algorithm to do a proper high five yet.”

A few others played into the robot theory with a fan writing, “The robot has yet to learn the high five,” while this guy hit it out of the park by saying, “Love hanging out with my fellow humans at our favorite event, football.”

Love hanging out with my fellow humans at our favorite event, football https://t.co/pYjJghbREg

Odd to say the least.

Being the wealthiest person on planet earth (at times) also means you are one of the most talked about people. Recently, Jeff Bezos tried to impress the internet with out ‘relatable’ he is by tweeting about his first job.

There was also the time the entire city of Rotterdam got ready to throw eggs at his mega yacht over a bridge debacle back in February.

And in November of last year, Jeff Bezos’ girlfriend appeared to make a pass at Leonardo DiCaprio. Jeff saw the jokes and tried to play it cool…

It is interesting that Jeff Bezos was the main name once attached to the Denver Broncos as a potential suitor. There was a time when everyone thought Bezos was going to purchase the Denver team. And now we see him sitting with Roger Goodell on Thursday Night Football after securing the broadcasting rights for the foreseeable future…

Is it too early to start thinking about Jeff Bezos buying the Cowboys one day?