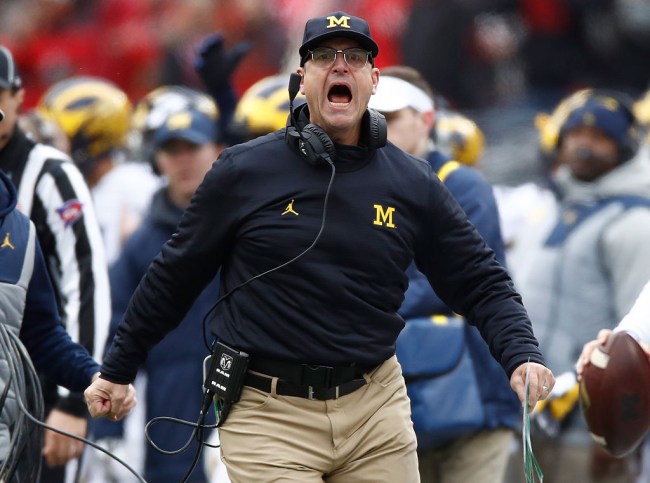 It’s been five years since the University of Michigan tapped Jim Harbaugh in the hopes of turning their football program around after both the Rich Rodriguez and Brady Hoke experiments failed pretty miserably, and compared to those two eras, things have gone pretty well since he took the job.

Harbaugh managed to rack up three 10-win seasons during the first four years of his tenure while doing a wide variety of wacky shit—like sleeping over a recruit’s house and helping to deliver a calf—and a couple of years ago, there were reports the school was looking into signing him to a lifetime contract.

However, there are plenty of people out there (including Paul Finebaum) who don’t believe the noted khaki lover has lived up to the lofty expectations that were set for him when he took the helm, as many fans were hopeful Harbaugh would be able to transform Michigan into an Elite Program.

Since beginning his tenure, the coach has failed to bring home a Big Ten championship, earn a spot in the College Football Playoff, or—perhaps most notably—win a game against Ohio State.

On Saturday, Michigan dropped its second conference game of the season after losing to Penn State (much to the chagrin of one asshole fan) and there’s been plenty of grumbling in Wolverine Nation about the future of the program as people get increasingly restless.

However, according to Football Scoop, Harbaugh might be over the whole “college football” thing, as Fox‘s Joel Klatt reports there are rumors that he’s looking into getting the hell out of Ann Arbor and making his grand return to the NFL, where he fared pretty well while at the helm in San Francisco.

As a fan of a thoroughly mediocre college football team, I’d be lying if I said a big part of me doesn’t hope Harbaugh peaces out before his contract expires and thrusts Michigan’s program into shambles to bring their fans down a peg or two.