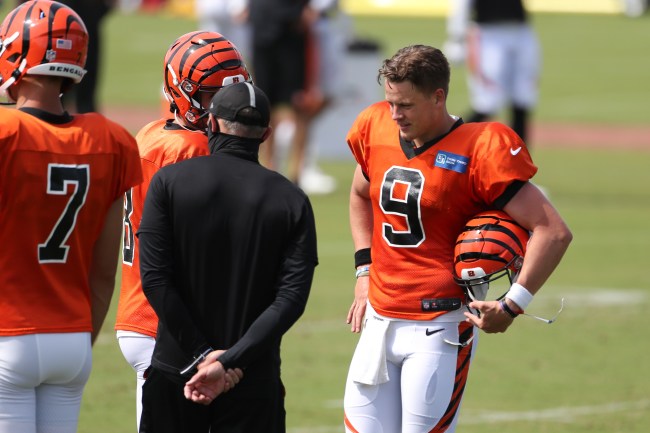 Life is good right now for Cincinnati Bengals rookie quarterback Joe Burrow. He finished off his college career with an undefeated season at LSU topped with a National Championship and Heisman Trophy. He was then drafted #1 overall in the 2020 NFL Draft and signed a 4-year contract with the Bengals worth $36.19 million which included a $23.9 million signing bonus. And the season hasn’t started yet so he doesn’t have the media maelstrom swirling around him and questioning everything he does or doesn’t do on the field.

Burrow has said that he won’t spend any of his NFL paychecks and instead he will only live off his endorsement money as a way to responsibly manage his finances for the future. He told the media his NFL paycheck money will go into retirement savings and investments. It’s unclear if that includes any checks from his $23.9 million signing bonus.

In a departure from the shrewd investor mentality and lifestyle, Joe is now the proud owner of a new ‘#9’ diamond necklace in honor of his jersey number. For this piece, he worked with celebrity jeweler Leo Frost to create the #9 pendant with so many jewels it’s blinding. The pendant is made up of 18k white gold and VVS diamonds while the chain is an 18k white gold prong-set Cuban chain that is also covered in VVS diamonds.

If you’re not familiar with diamond terminology, and there’s no reason you should be, VVS stands for ‘Very, Very Slightly’ which is a classification of diamond denoting the clarity of the stone. It means the diamonds aren’t perfect in clarity but even at 10x magnification, a skilled grader will have difficulty spotting any impurities in a VVS1 classified diamond so they’re damn near perfect to the naked eye and even under a microscope.

Respect to Joe for knowing what he wanted and spending $$$$$ to buy it. I’m a little surprised he didn’t buy a watch like a Patek Philippe or Audemars Piguet but I guess this diamond pendant and chain match perfectly with his three gold and diamond championship rings from LSU.

The only thing that I’m getting caught up on here is when will Burrow actually wear this pendant? Or was this a piece designed to sit in his trophy case at his house? It’s hard to imagine him regularly wearing something that out of the house.