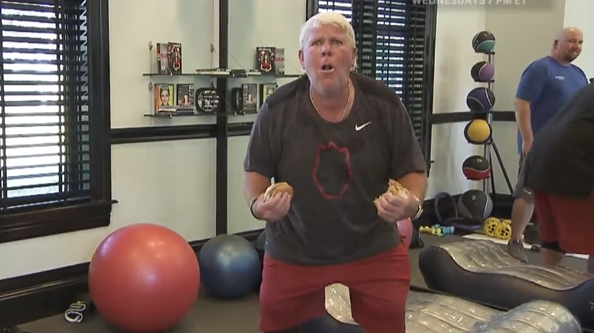 We’ve featured some impressive workout regimens for athletes, actors and other celebrities throughout the years, but you’ve never seen anything quite like John Daly’s exercise routine.

John Daly has never been the poster boy of good health, but that didn’t stop him from winning The Open Championship and PGA Championship. Now at the age of 52, Daly is starting to think about getting into better shape. So JD enlisted his friend Jocko Deal to be his “world famous” trainer. Unfortunately, Deal knows as much about fitness as Daly does. Deal is actually a musician from Arkansas and not a fitness trainer.

The two invited the Golf Channel into their temple of health where Daly engages in his grueling workout training. But this is John Daly, so you’re getting a John Daly workout that includes McDonald’s, Marlboro Reds, beer, and pool noodles.

RELATED: Jordan Spieth Shared How He Trains To Win Majors And It’s Proof The Best Golfers Are Now Athletes

With his finest Razorbacks flip-flops on, Daly first hits the treadmill where he casually strolls at a snail’s pace and a burger is his motivation to keep walking. Next up, Daly takes some swings at a punching bag, but after three punches John is winded and his face is as red as the punching bag. John wisely stops the workout before he has a heart attack, and then indulges in a mouthful of French fries.

John then focuses on building up his arm muscles by lifting weights. John struggles with the 1-pound weights and trades them in for two burgers to curl, which he crushes and then devours his meaty weights.

RELATED: Dustin Johnson Revealed The Diet And Workout Regimen He Uses To Stay In Shape On Tour

After all of that strenuous exercise, John and Jocko hit the pool. But JD’s workout continues where Jocko motivates Daly to put down his cigarette for a second to do a “sit-up” on the lounge chair that’s in the pool. Then Daly does leg lifts and rewards his effort with a big gulp of cola.

John continues to sculpt his body with a backbreaking training of throwing an inflatable pool tube. John ends his exhausting training with a battle ropes inspired exercise that uses pool noodles instead. The full workout, which I think Daly actually gained weight, can be seen on the Golf Channel’s Champions Tour Learning Center TV show. God bless John Daly.