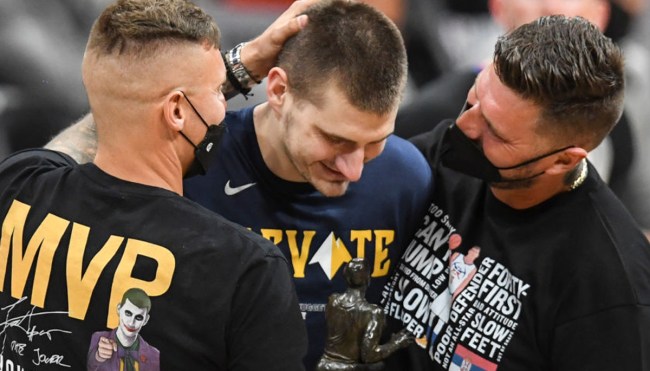 On Monday night, basketball fans were treated to their latest dose of NBA drama when Nikola Jokic took exception to Markieff Morris’ decision to foul him late in the fourth quarter and responded by delivering a bodycheck that resulted in a fairly dicey situation unfolding on the court in Denver.

It’s safe to say the Heat were not thrilled with Jokic based on their decision to attempt to confront him in the locker room after the game—just like it’s safe to say his brothers were not thrilled with Morris and his brother Marcus. On Tuesday morning, the Jokic Brothers used their joint Twitter account to issue a thinly-veiled threat, which sparked a back-and-forth with Marcus that continued over the course of the day.

You should leave this the way it is instead of publicly threatening our brother!Your brother made a dirty play first . If you want to make a step further be sure we will be waiting for you !! Jokic Brothers

@MookMorris2 You should leave this the way it is instead of publicly threatening our brother!Your brother made a dirty play first . If you want to make a step further be sure we will be waiting for you !! Jokic Brothers

I don’t believe…I know that!

Based on a new report, it looks like Strahinja and Nemanja Jokic decided to put their money where their mouth is, as the duo will reportedly be in attendance in Miami when the Heat face off against the Nuggets on November 29th.

A reliable #NBA source told me, the @Jokicbrothers bought tickets today and are expected to be at the #Nuggets #Heat game in Miami on November 29th.

Nikola Jokic isn’t exactly the kind of dude that needs to have his older brothers take care of situations for him, but it certainly doesn’t hurt to have them in his corner. The 6’6″ Strahinja played Division I basketball at the University of Detriot Mercy and the 6’8″ Strahinja played professionally in Europe (and also once threw knives at Nikola when he refused to climb a tree during a picnic as a kid).

Last season, security had to get involved in Phoenix when the Jokic Bros got very heated during an incident between Nikola and Cameron Payne, so it’s safe to assume they’ll have more than a few eyes watching them later this month.