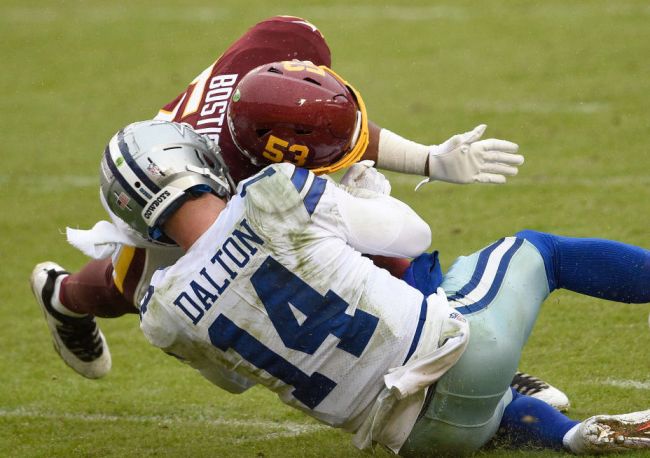 The Dallas Cowboys spent the offseason going back and forth with Dak Prescott as he fought for a massive deal he felt justified in asking for based on what he’s contributed over the past few years but the two sides were unable to come to an agreement. As a result, the quarterback entered the most recent campaign with a bit of a chip on his shoulder and something to prove only to see it come to a premature end after suffering a brutal ankle injury that resulted in him having to undergo season-ending surgery.

As a result, the Cowboys were forced to turn to Andy Dalton as they continue to vie for the top spot in one of the most underwhelming conferences the NFL has seen in recent memory. However, they suffered yet another setback during Sunday’s game against the squad currently known as the Washington Football Team when linebacker Jon Bostic knocked the QB out cold on what appeared to be a fairly late hit in the middle of the third quarter.

Dalton was ultimately carted off the field and plenty of fans called for Bostic’s his head as a result of the blow to the head that resulted in seventh-round rookie Ben DiNucci stepping into the pocket, who unsurprisingly failed to lead the team back from the 19-point deficit it was facing when he entered the game.

There was little doubt the league was going to take a closer look at what transpired on the play, but according to Adam Schefter, a source claims Bostic will manage to avoid a suspension for the actions that led to his ejection.

After being ejected Sunday, Washington LB Jon Bostic is not expected to be suspended for his hit on Dallas QB Andy Dalton, per source.

Plenty of fans are obviously displeased with this particular development, and while Mike McCarthy called out his players for not coming to Dalton’s defense, some have also opted to place the blame on Dalton for putting himself in a defenseless position by deciding to slide fairly late after Bostic had committed to the tackle the QB says he barely remembers.

When you consider other players have been suspended for much less, this seems like an interesting decision by the NFL, but if you’re still surprised by the league’s inconsistency when it comes to implementing discipline, you have no one to blame but yourself.