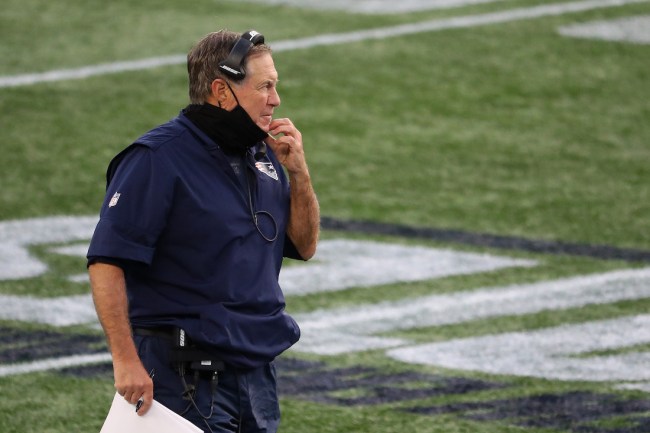 When Jordan Love got selected No. 26 overall by the Green Bay Packers in the 2020 NFL Draft, many thought it was a slap in the face of quarterback Aaron Rodgers — which, if we’re being honest, it absolutely was. While Love showed potential during his time at Utah State in college, Rodgers is a future Hall of Famer who was less than thrilled with the selection of his presumed replacement. Luckily, he used the team’s choice as motivation and went out and won league MVP.

Similar to how Rodgers replaced a Packers legend years ago (Brett Favre), the narrative around the franchise has long-been how both the incumbent starter and Jordan Love can co-exist, wondering if there’s too much tension between the two for one position. But could Green Bay eliminate such concerns this offseason by shipping the second-year quarterback out of town? A leaked photo seems to suggest that.

According to the Twitter account Gillette Nation, an image surfaced from an apparent Packers staffer hinting that the New England Patriots could make a trade for Love leading up to the NFL Draft, with New England trading down from pick 15 to acquire Jordan Love, the 29th pick and a 4th round pick (142nd) from Green Bay.

The details are the Patriots trading down from pick 15 to acquire Love, the 29th pick and a 4th round pick (142nd) pic.twitter.com/Pb4453cbG2

Obviously, we have no context as to this mystery sheet of paper that just popped up online and tweeted out. Anybody could’ve just staged this to appear to be something official from the Packers and shared it on Twitter to get a bunch of reactions leading up to the NFL Draft. Hey, that’s the way the world works these days.

Then again, it’s believable because Bill Belichick is the boldest head coach in NFL history, and doesn’t necessarily value draft picks the way other franchises does. So if he and the Patriots can improve the roster by trading down to acquire Jordan Love — who could become the team’s starter sooner rather than later — as well as other draft assets, Belichick will do it.

After the image appeared online, though, fans had a bunch of reactions. Some called bluff on the apparent leaked photo, while others questioned why either the New England Patriots or the Green Bay Packers would do such a trade. Take a look below at some of the comments.

My sister’s best friend’s cousin knows a guy who drank too much at hinterland (across from Lambeau) who told someone else that Jordan Love is actually Aaron Rodgers’ biological son.

No way this is real.. Patriots wouldn't trade their 1st for a QB that will never be.. Love was predicted to be a 4th/5th rounder until the idiocy of GB happened.

The Patriots think so highly of Jordan Love that they elected to trade back and take a safety instead of drafting him. https://t.co/tU7eF9X6Hp

If it’s real, which I don’t think it is, and the Green Bay office leaked it. Belichick just cancelled it

lmao no way packers do this 😂 https://t.co/Bm3WbjEnL8

Would be QB6 in this draft

Jordan Love didn’t see a single snap last season thanks to the dominance of Aaron Rodgers, so nobody really knows how he’ll handle going up against an NFL defense. But Bill Belichick has always sort of been a made genius, willing to take risks and do unconventional moves to help keep the Patriots competitive — and this would definitely fall under that category if it happens. Then again, it’s crazy season as the NFL Draft approaches, so who knows what is and isn’t really believable this time of year.