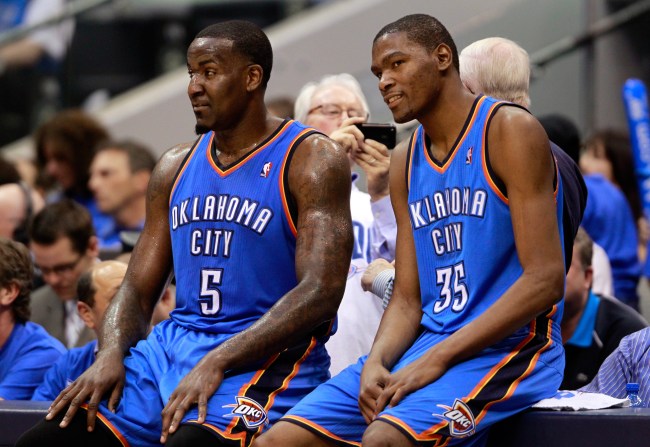 Like a fine wine, the Kevin Durant-Kendrick Perkins beef is one of those things that just keeps getting better and better with time. While the two used to be teammates and (seemingly) pretty good buddies while playing together with the OKC Thunder years ago, the relationship’s gone a little stale since Perk joined the media and began voicing some opinions about KD. Hey, that’s just part of his job, right?

Unfortunately, Durant — who has always been sensitive AF, even creating burner accounts on Twitter to try to defend himself — doesn’t find the criticism from Perkins as fair game. In fact, the current Brooklyn Nets star has fired back numerous times, not only igniting the beef between the two, but maintaining that flame for as long as possible.

Well, the latest saga in the Kevin Durant-Kendrick Perkins beef happened Wednesday, as Durant joined the Tea with A and Phee podcast hosted by WNBA players A’ja Wilson and Napheesa Collier.

Seemingly a harmless conversation, Wilson and Collier eventually asked Durant what he thought Perkins’ scoring average was during the 2013-14 MVP season that KD had while both were with the Thunder. Durant guessed 4.0 points per game — which, although low, is actually higher than what the answer really was: A paltry 3.4.

Things went south from there, with Durant then running with the lower scoring average and absolutely clowning Perkins with the two WNBA players. Take a look below at the whole exchange.

Durant: No way he averaged less than 4 points per game.

Durant: Oh my Gosh…Yo he really averaged 3.5 points a game?

That laughter really makes it, man. It’s pure pettiness. Like, as soon as Kevin Durant realizes Kendrick Perkins’ averaged just 3.4 points per game while averaging 19.5 minutes per contest during the 2013-14 campaign, he can’t help but go into full troll mode. Perk has to feel a little inferior after this.

Given what’s happened in the Kevin Durant-Kendrick Perkins beef to this point — which has included Perk criticizing Durant’s move to join the Warriors in 2016 and an apparent middle finger from Perk to KD after a game in 2018 — one can probably expect the current ESPN analyst to reply in kind. I’m here for it, because, even without Durant playing in the NBA bubble, he’s still taking plenty of shots.