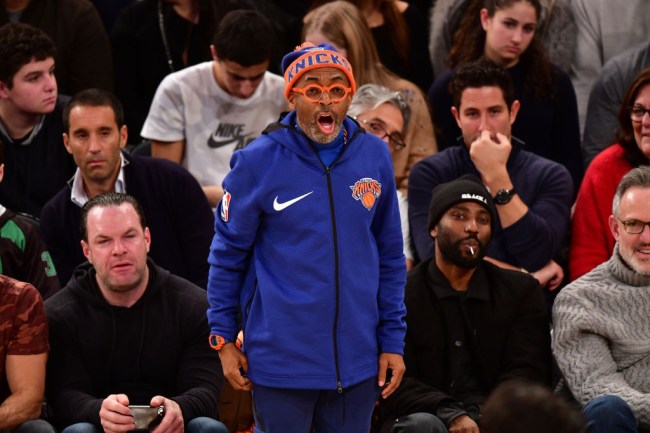 Before Monday night’s game between the Rockets and Knicks at Madison Square Garden, a video circulated of Lee getting into a confrontation with arena security after he apparently tried to use the employee entrance instead of the standard VIP entrance.

While Lee eventually did make it to his courtside seat, he decided to join ESPN’s First Take on Tuesday morning to tell his side of the story straight up saying that he’s being harassed by Dolan. He also explained that he spends $300k a year on Knicks tickets, but won’t be attending any more games for the rest of the season.

"I'm being harassed by James Dolan and I don't know why."

So, naturally, after Lee went on television to embarrass the Knicks and Dolan, the team released a statement that is so Knicks-esque it hurts. Not only did the franchise that’s worth $4.6 billion put out a statement using the phrase ‘is laughable’ like you’d see some guy use that blogs for a living (me, I’m talking about me) but they also included photos. Yep, they attached photos of the Penn Plaza entrance Lee is supposed to use and then some creeper-style picture from the nosebleeds of Lee and Dolan shaking hands.

For an NBA team that’s already lost 42 games this season and has won exactly one playoff series since the year 2000, they sure know how to keep fans engaged.

The only thing remotely interesting about the Knicks at the moment is this ordeal between a movie director superfan and the CEO of The MSG Company that gets people kicked out of music festivals for suggesting he sell the team.

Related: Internet Detectives Are Convinced Knicks Owner James Dolan Has A Burner Account On Twitter Dedicated To Defending His Honor