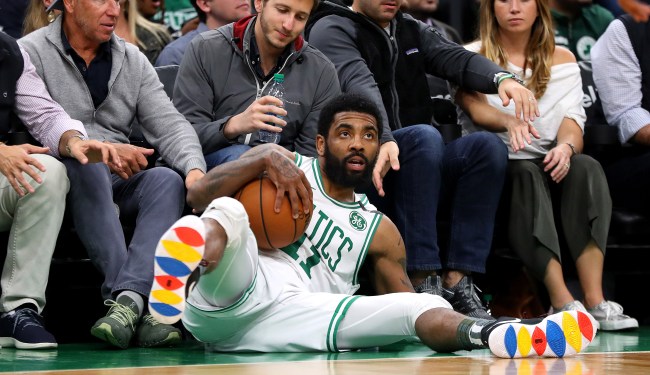 I think someone might want to do a wellness check on Boston Celtics’ star point guard Kyrie Irving. I’m not joking. His behavior this season has been seriously off.

He started this NBA season out by declaring that he thinks the Earth is flat. Then he complained about the “challenge” of playing alongside LeBron James. He followed that up by publicly ripping his young teammates. Then he got upset over rumors that other superstars influencing his free agent decision.

Irving then complained that he doesn’t want to be a celebrity, which prompted every NBA in the world to point out that he recently made a movie and does numerous commercials. After which, Charles Barkley publicly called him out, saying he thinks Irving is “one of the most miserable people” he’s ever seen.

He also, for some reason, told ESPN’s Jackie MacMullan at one point that he is “an actual genius when it comes to this game.”

And now, after going down three games to one to the Milwaukee Bucks in the playoffs, Irving said after the game with regard to his poor shooting in the series, “Who cares? I’m a basketball player. Prepare the right way. Like I said, it’s a little different when your rhythm is challenged every play down. You’re being picked up full court. They’re doing things to test you.”

Irving then added this gem, “The expectations on me are going to be sky-high. I try to utilize their aggression against them and still put my teammates in a great position while still being aggressive. I’m trying to do it all. For me, the 22 shots? I should have shot 30. I’m that great of a shooter.”

So it’s not that great of a surprise what Jalen Rose said on Tuesday’s edition of Get Up that Irving’s Celtics teammates don’t feel bad about the potential of him leaving Boston in free agency.

“They used to be a pace-and-space team, where the ball and the moment dictated who got the shot,” said Rose. “Kyrie Irving is a ball-dominant, isolation type of player. They used to be a team where Al Horford, their center, led them in assists. Okay, that was their style. Now, they’ve chosen to give the ball to Kyrie to take them home. He’s shown that he can’t be the best player on a contending team.”

Hard to argue. The only question now is, where does Irving end up playing next season?