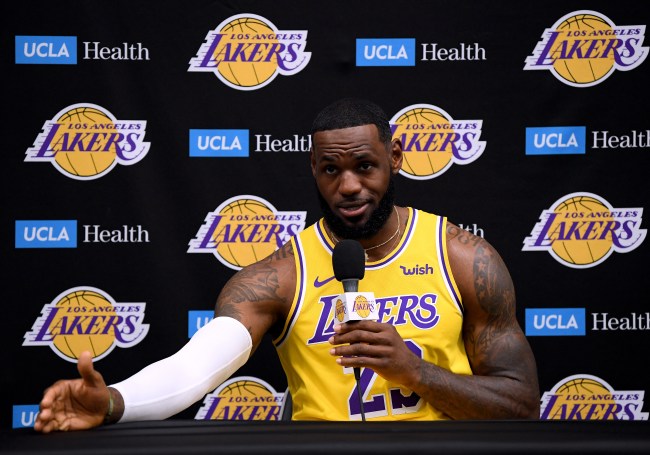 LeBron James has long-been in support of NCAA student-athletes and other amateur athletes to be able to profit from their likeness. It’s why he’s been so outspoken about the previously proposed “Fair Pay To Play Act,” which was recently signed by California governor, Gavin Newsom, on James’ HBO show, The Shop.

For those unfamiliar with the new law, it basically goes against what the crooked NCAA has said for years, meaning, beginning in 2023, college athletes have the right to profit from their name and likeness. That means that college football players will be able to make cash for being part of video games, and college soccer players can film and sell a training video to earn money, among other examples. It’s a huge step in the right direction, and gives plenty of people a lot of flexibility and options that weren’t previously available.

Considering LeBron James was the most-hyped amateur athlete ever — and was unable to earn money from anyone selling merchandise with his name and likeness — it’s no wonder the Los Angeles Lakers superstar talked about why the passing of the new law in California is so personal to him.

During the Lakers’ media day, James described his excitement for the next generation of athletes, and detailed why the “Fair Pay To Play Act” is so personal to him.

“For sure I would have been one of those kids if I would have went off to Ohio State or if I went off to any one of these big-time colleges where pretty much that 23 jersey would have got sold all over the place without my name on the back. But everybody would’ve known the likeness. My body would have been on the NCAA basketball game, 2004. The Schottenstein Center would have been sold out every single night if I was there. Coming from just me and my mom, we didn’t have anything. We wouldn’t have been able to benefit at all from it. And the university would’ve been able to capitalize on everything that I would’ve been there for that year or two or whatever.

It’s understandable as to why LeBron James is so passionate about this. After all, go back any number of years in any college sport, and there will be one of those once-in-a-decade athletes who redefined what a college athlete is.

Matt Leinart and Reggie Bush while at USC. Tim Tebow while at Florida; even though he doesn’t think it’s necessary. Zion Williamson while at Duke. Those are just to name a few popular instances, and don’t even mention the other student-athletes in other sports who couldn’t earn money from their success.

Although there’s sure to be a long appeal process with the NCAA over the “Fair Pay To Play Act,” as of right now, California just legalized it, so it’s official until otherwise noted. And, with people like LeBron James in support and talking openly about why the rule should be approved by every state, who knows what the future holds in college sports.