Le’Veon Bell Reveals The Teams Who Inquired About Him At Trade Deadline, And It Included The Steelers 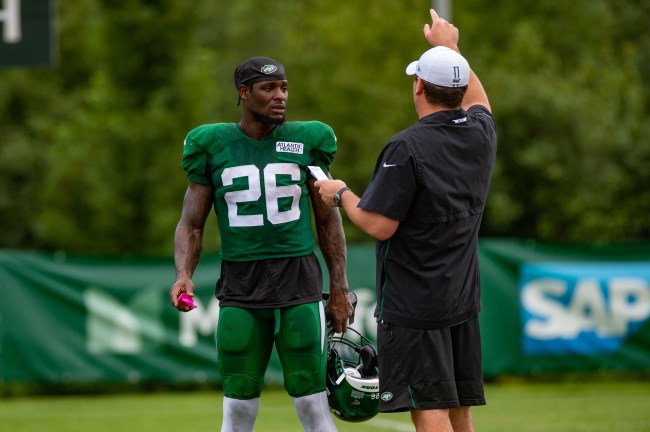 Le’Veon Bell is an All-Pro talent who decided to play for a, seemingly, semi-pro NFL team when he signed with the New York Jets this past offseason. While the running back did get big money — four years and $52.5 million, to be exact — the fact that the team’s head coach, Adam Gase, didn’t even want to sign him in the first place was proof that this relationship may have been strained from the jump.

Add in the dysfunction around the Jets’ front office — which fired former general manager Mike Maccagnan after the guy used up their salary cap space and signed Bell, among other players — and Le’Veon Bell’s welcome to New York party was short-lived AF.

Fast-forward to this week, and reports had the Jets actually exploring trades for Le’Veon Bell before the NFL Trade Deadline. While the team, ultimately, decided to hang on to the guy, it’s further proof that this thing is totally F’ed up. And, although the Jets’ current general manager, Joe Douglas, did consult Bell to let him know about the trade reports, it still shows how backwards the entire franchise is.

So which teams were calling the Jets about Le’Veon Bell? According to the running back, who opened up about the trade rumors on his Sirius XM podcast 17 Weeks, there were a handful of teams — one of which was the Pittsburgh Steelers, who Bell played for before signing with the Jets, and had an awkward holdout with all of last season.

“There was a lot of trade speculations and rumors about, you know, me getting traded obviously from the Jets to other, multiple teams,” Bell said, via Pro Football Talk. “And they were actually true. There were times where — I found out from my agent, you know, he had talked to the Jets and things like that. But there were teams like Houston, the Packers, the Kansas City Chiefs, and surprisingly the Steelers, were all in the mix of trying to trade for me.”

“The Jets were really asking for a high price and a lot for me,” Bell said. “On top of that, my actual contract was kind of tough for teams to deal with, which is understandable. Not too many teams want to pay that high of a price for a running back.

“To be honest, I was not trying to take a pay cut, simply for the fact that I sat out a full year of football to get what I earned and deserved. That would’ve kind of defeated the whole purpose, so I didn’t want to do that.”

Could you imagine Le’Veon Bell rejoining the Steelers after the awkwardness of last season? With James Conner likely out for a couple weeks with an AC joint injury, Bell could’ve picked up for the Pro Bowler, but, damn, that could have been weird.

While Bell seemed pretty cool with all the trade rumors after the fact, he did praise GM Joe Douglas for being so candid with him about the whole process, saying that the front office exec did his part to loop in the player throughout, while also reiterating that teams were calling the Jets, not the other way around.

“[H]e took his time out to call me,” Bell said. “He kind of told me that they weren’t really shopping me in a sense but teams kind of inquired about me before the trade deadline. And, you know, he was honest with me, he said he was open to it. But like I said earlier, teams were really asking for a lot and he wasn’t really trying to give me up for something he didn’t feel like would help the New York Jets in the future. And he obviously feels like I’m a player who can help turn this team around.”

Le’Veon Bell used to be one of the most dynamic players in the NFL. And while he’s still young, hungry and, presumably, fresh after a year away from football in 2018, playing for a crappy Jets organization doesn’t give too much hope that he’ll rediscover those skills that led him to such a big payday.