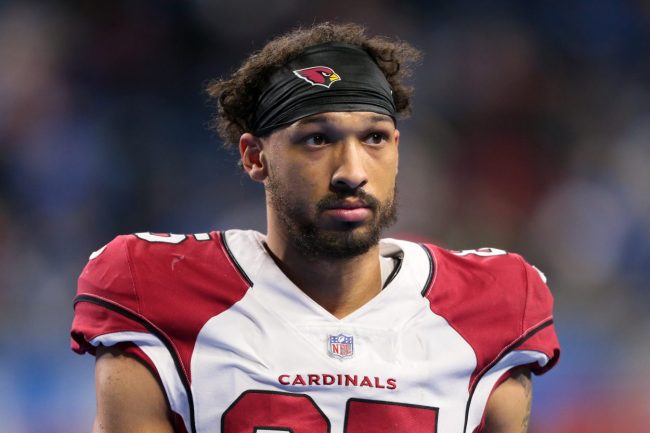 The one-win Lions were not expected to beat the 10-win Cardinals on Sunday. 72% of bettors placed money on Arizona to win by more than 12.5 points and the odds were stacked heavily against Detroit.

And yet, the underdogs came out on top. It wasn’t particularly close.

Head coach Dan Campbell gave an impassioned speech after the game that summed up the grit and tenacity that it took to take down the NFC’s top team. En route to the win, the Lions pulled off some very big plays and Gus Johnson was going bananas in the booth.

It was a complete, confident win from the opening kickoff until the clock hit zero. NFL fans who did not have a stake in either team were thrilled to see the Lions pull it out.

There was one fan in particular, however, who was not.

The fan, named “Gage,” appears to be an Arizona fan, based on his Kyler Murray profile picture on Twitter. He made a very bold promise prior to the game.

He said on Thursday that if the Lions were to beat the Cardinals on Sunday, he would get a tattoo of Jared Goff’s name. The tattoo was to be inked on a very painful, explicit part of his body.

Well, Detroit pulled off the upset.

As a result, if Gage was a man of his word, he was set to swing by the local tattoo parlor. Instead, he disappeared off of the face of the earth.

Or, in this case, the internet.

Shortly after the clock expired and the Lions officially won their second game of the season by a score of 30-12, people began to discover and resurface his tattoo promise. Not long after that, Gage deactivated his Twitter account.

It is unclear who exactly Gage is. Perhaps only his 523 twitter followers would have a clue.

He has since returned to Twitter, but deleted his tattoo promise tweet and offered the following statement:

And think what you want about me, idrc. The only reason I post stuff on here and I’m even on this app is that I hope to lighten up at least one persons day.

Regardless of his true identity, karma is coming for Gage. Did he curse the Cardinals by not getting a Goff tattoo? Only time will tell.