With Patriots’ Uncertainty At QB, Sportsbooks Give Odds On Where Mac Jones Will Play In 2023 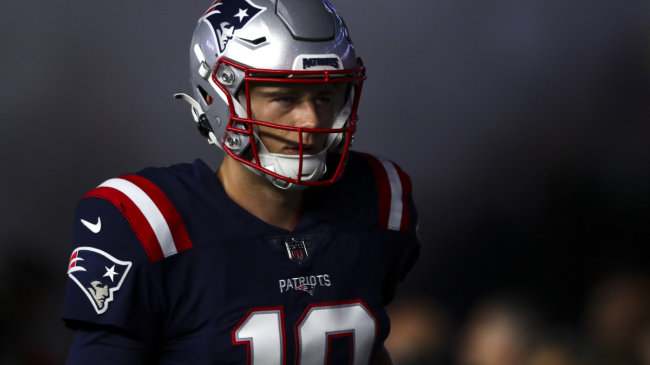 The Patriots have a bit of a quarterback controversy in 2022. Mac Jones began the year as the starter under center after leading New England to the playoffs last season.

He played three games with the Pats before injuring his ankle in a matchup versus the Ravens. During that time, he’d completed 66% of his passes, throwing for 786 yards and a pair of touchdowns. Unfortunately, trouble with turnovers (5 INTs) led to a 1-2 start for the team.

Backup Brian Hoyer took over in Week 4 but was forced out of action with a concussion. That’s when third-string passer Bailey Zappe was inserted into the lineup.

Over four games (2 starts), the rookie out of Western Kentucky has thrown for 781 yards, five scores, and three picks. New England is 2-0 with Zappe starting at the helm, creating a bit of uncertainty in the quarterback room.

Jones returned to the field in Week 7 against the Bears but played poorly. He completed just three of his six passes, throwing an interception. His biggest headline came on a scramble where he appeared to purposely kick a defender in the groin. Zappe came in shortly after that pick, leading the Patriots on a pair of scoring drives after the team fell behind 10-0.

The first-year signal caller struggled in the second half, being outplayed by Justin Fields in a 33-14 loss, but the fact that he was under center for both New England touchdowns has created drama in Foxboro.

Fans are torn on who to start, and head coach Bill Belichick is staying mum on his decision for the upcoming game against Jets. That uncertainty has led one betting site to speculate on Mac Jones’s future.

Bookies.com gives odds for where Mac Jones will play in 2023

The site posted the updated odds following the loss to the Bears in which Jones was replaced by Zappe. While the Patriots remain the favorite to hold on to the passer, there are some interesting possibilities on the list.

One key contender’s chances could rest on the future of another former New England passer. The team with the second-best odds happens to be the Tampa Bay Bucs. Tom Brady has said he has no plans to hang up the cleats, but off the field issues, most notably an ultimatum given by wife Gisele Bundchen, could force his hand into retirement.

Others on the list include the Lions, Colts, and Panthers, all of whom have seen quarterback issues this season. See the updated odds below.

New England is the overwhelming favorite, but should Jones wind up losing the job over the next few weeks, it could force Bill Belichick to make a decision. Jones would probably garner some interest on the trading block as teams are always in need of quarterback help. Would the Patriots move on at the end of the year?