Magic Johnson Says Of The Lakers’ Success: ‘This Team Would Not Be In The Position It’s In Without Me’ 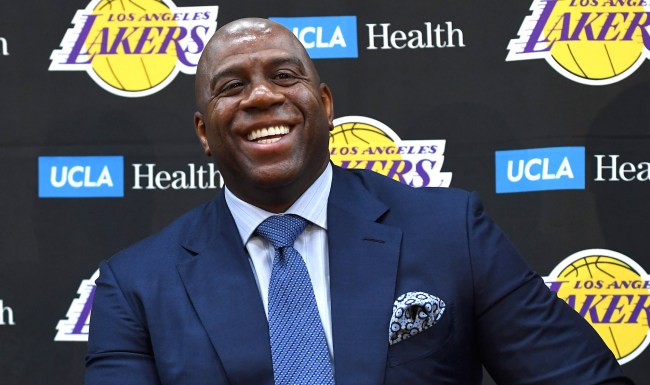 After a disappointing 37-45 record in LeBron James’ first season playing for the Los Angeles Lakers, the team from Tinseltown has been absolutely on fire this year jumping out to an astounding 24-4 record and currently sit in 3.5 games up on the Clippers in first place in the Western Conference.

Naturally, since he was the Lakers’ President of Basketball Operations from February 21, 2017 to April 9, 2019, the accolades for the team’s success this year have to fall at the feet of Magic Johnson. Right?

He certainly thinks so.

In a new interview with Bill Plaschke of the Los Angeles Times, Magic said, “This team would not be in the position it’s in without me.”

He talks about the trades he and [GM Rob] Pelinka made to clear the salary cap space to sign James, notably the dealing of Timofey Mozgov and D’Angelo Russell. He talks about his recruitment of James. He talks about the players they drafted — Lonzo Ball and Josh Hart — who were included in the deal for Anthony Davis.

”This was my strategy, this is what I thought we’d be in three years,” he says. “I knew we were on the right track. Everybody wanted to do it their way, but I’m good with who I am. … I think people respect what I’ve done for the team.”

So, he wouldn’t change anything that happened during his tenure? His public bickering with Pelinka? The alleged toxic work environment he created? His mishandling of Kawhi Leonard during free agency? The way he resigned without giving anyone in the organization any notice?

Magic says he has no regrets, “I’m not a regretful guy,” but did admit, “The only thing I would have done different would be to sit down with Jeanie [Buss] and let her know I was leaving, sit down with LeBron [James] and let him know … otherwise, I wouldn’t have changed anything. I still would have walked away.”

He also says he and Pelinka have made up and even spoke a few days ago, but he still somehow hasn’t spoken in any detail to Lakers’ owner Jeanie Buss about his resignation.

“I haven’t talked with Jeanie about everything yet,” he admitted. “We’ll get together and have a meeting where there’s no media. Yeah, I should have told her what I was going to do.”

So sure, the Lakers’ hot start this season is totally thanks to the moves Magic made – the biggest one being stepping down as the team’s President of Basketball Operations. That’s worked out splendidly.