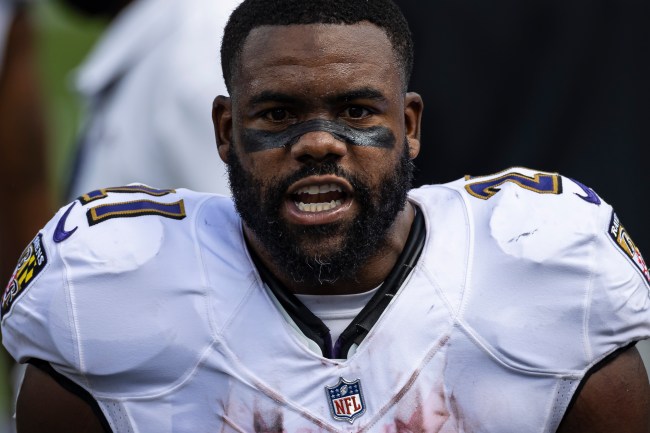 As a former Heisman Trophy winner and first-round pick, running back Mark Ingram has been a beast on the football field his entire life. Like, put Ingram up against anybody else (that’s not a military dog) and he’ll normally get the best of them, either bulldozing over the defender or running past them with his 4.5 speed. So it’s probably engrained in him that he’s usually the alpha on the gridiron.

Enter Derrick Henry, who followed in Mark Ingram’s footsteps and took over the starting running back position at Alabama, and, like Ingram, went on to win the Heisman Trophy and become a first-round NFL Draft pick. And, if you’ve ever seen a certain picture of the two side-by-side before the coin toss at the National Championship Game a few years back — which has become viral ever since it hit the Internet — you might think the similarities between the two players stop there, because Ingram next to Henry looks like Simone Bilas next to Shaq. Just look at the Mark Ingram, Derrick Henry pic below to see for yourself.

Remember when Derrick Henry made Mark Ingram look like a small child? pic.twitter.com/RxORNQGYy6

Here’s the thing about that Mark Ingram pic with Derrick Henry, though: Angles. That shit matters in photography, and, unfortunately, whoever snapped that photo really didn’t do Ingram any favors, making it appear as if Henry is the Incredible Hulk or something. For that reason, Ingram’s pretty pissed, and actually voiced his displeasure with the image Friday morning.

Appearing on Barstool’s Pardon My Take podcast, Mark Ingram said the photo was “lame,” adding that the now viral pic makes him look like he’s 4’11” or something. You can take a look at the conversation below.

Mr. Cat: How mad do you get every time they post the Derrick Henry-Mark Ingram picture, and can you explain why you look so small?

Mr. Cat: Yeah, I mean, it’s an all-time picture, and I agree, you post that, you’re lame. Whatever, that’s not Big Truss.

This actually sucks for Mark Ingram, guys. I know he’s getting his and probably isn’t losing sleep over the picture next to Henry, but it’s like LeBron James getting posterized — as an athlete, you just don’t want that embarrassing image floating around out there. Unfortunately, it’s too late for Ingram and every sports fan has seen it, so it’s probably best he just embrace and joke about it at this point; because the Internet is forever, Big Truss.