Max Scherzer, Fans React To Him Being Pulled From A Perfect Game After Just 68 Pitches 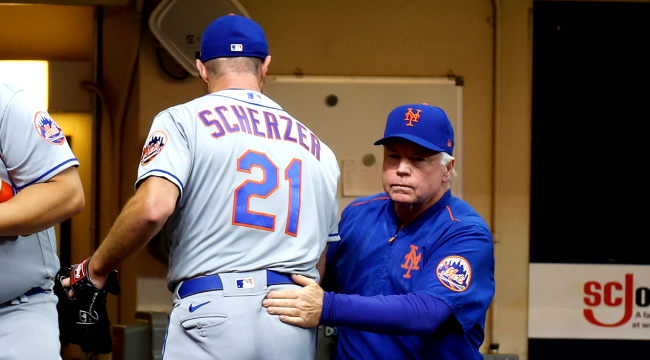 In what is becoming a growing trend in Major League Baseball, a star pitcher was pulled from a game Monday night while throwing a no-hitter.

After six innings and just 68 pitches, New York Mets ace Max Scherzer exited the game versus the Milwaukee Brewers while throwing not only a no-hitter, but a perfect game.

Scherzer threw 47 of his 68 pitches for strikes and had struck out nine batters, but since he was just reinstated from the injured list before the game he didn’t get to finish.

Immediately after being taken out of his perfect game, Christian Yelich doubled leading off the seventh against Tylor Megill and the Brewers ended up scoring two runs in the inning.

Scherzer still got his 10th win of the season as the Mets prevailed 7-2 as Pete Alonso hit his 36th home run in the fourth inning and drove in three runs to move to 118 on the year, best in the National League.

After the game, Max Scherzer, a pitcher who usually refuses to leave games, was asked about being pulled from a perfect game.

“Wasn’t going to have a chance to go out and complete it,” a surprisingly understanding Scherzer told the media. “You just got to take your victories where you can get them. For me that was throwing 6 innings tonight, getting to 68 pitches and executing with all my pitches.”

Max Scherzer talks about coming out after 6 perfect innings:

"Wasn't going to have a chance to go out and complete it. You just got to take your victories where you can get them. For me that was throwing 6 innings tonight, getting to 68 pitches" pic.twitter.com/YFEmwO1zs1

Scherzer’s win Monday night, the 200th of his storied career, also secured the Mets their first postseason berth since 2016.

“This is what you play the game for, you play to get into the postseason,” Scherzer said after the game. “The fact that we got here, there’s a lot of ways for it not to work out. For us to find a way, that is awesome, that is what we celebrate. But we have a lot of things in front of us and we understand that, but man you have got to understand the good times too.”

Baseball fans, as usual in cases such as this, had mixed emotions about a pitcher being pulled from a potentially historical start.

Awful. As fans we are cheated. Since when is 68 pitches over worked. 9 more outs. If Mets don’t win world series, this means nothing. Very disappointing.

Last month, Justin Verlander was pulled from a perfect game after just 91 pitches.

When reached for comment on Max Scherzer being pulled from his perfect game tonight after six innings and 68 pitches due to a recent oblique strain, Cy Young said “What the fuck’s an oblique?” pic.twitter.com/yzRrUnSWFm

Blake Snell was also pulled from a no-hitter one year ago after 7 innings and 107 pitches.

The only two times in MLB history that a pitcher has come out of the game after being perfect through 6 innings?

Welcome to Major League Baseball in the 21st century.