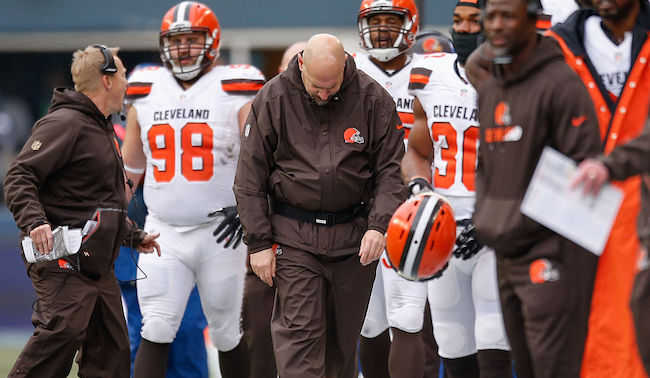 The Cleveland Browns, for lack of a better word, are bad at football. The team had a historically unprecedented record of 1-31 over the past two years and became just the second NFL team to lose all 16 games on their schedule thanks to the dumpster fire that was 2017. The only positive thing to come out of the season was the $17,000 Browns fans ended up donating to a Cleveland food bank, which is pretty inspiring until you realize it only happened because so many people contributed to a GoFundMe for a parade to commemorate their winless record.

The Browns’ incompetence both on and off the field was on full display during a 2017 season, which featured a spectacularly botched attempt to trade for AJ McCarron that’s left a vacancy that’s made USC quarterback Sam Darnold think twice about preparing for the draft.

It appears this depressing saga will continue based on Browns owner Jimmy Haslam saying he has a truly unjustified amount of confidence in current coach Hue Jackson (who will cleanse himself in the waters of Lake Erie to atone for the teams’ winless record). However, he had much less patience with Mike Pettine, who was fired after the final game of the 2016 season despite a comparatively incredible 10-22 record during his time with the Browns.

The Green Bay Packers recently named Pettine their new defensive coordinator, and while it could be viewed as a downgrade compared to his former position, the former Browns coach said he was so shaken by his stint in Cleveland that he never wants to lead a squad again.

How bad was it? At a press conference on Wednesday, he revealed that he’d actually lost some of his senses because of how traumatizing the experience was.

Pettine says he came out of Cleveland beat up mentally. "It took awhile before I could smell smells and see colors."

I can only hope the next person tasked with coaching Johnny Manziel can avoid suffering a similar fate.