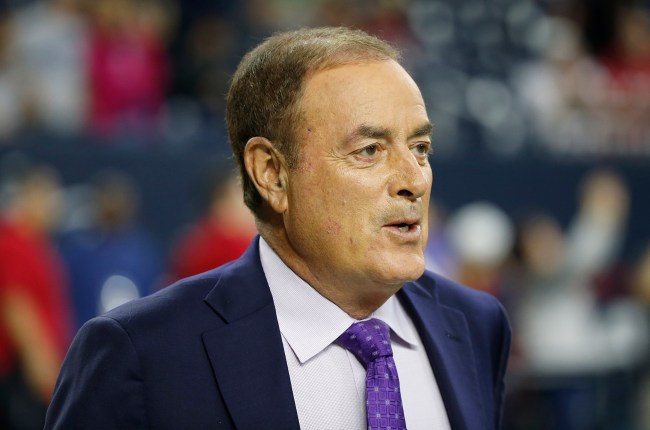 Anyone who’s watched Monday Night Football over the past couple years knows that it could use some serious upgrades. While it’s important for the ESPN-owned program to be a competitive game, it’s also important for the broadcast team calling said game to at least be entertaining and likable to fans watching on TV. Unfortunately, that’s been a major criticism since ESPN redid the MNF team in 2018, reshuffling some roles both years.

In 2018 we had the debacle that was Jason Witten on Monday Night Football, which ended after one season because, well, to be honest, he was a disaster. Witten’s performance was so poor that he left on his own accord and returned to the football field last season.

As piss-poor as that year went, the 2019 Monday Night crew wasn’t much better — which is why ESPN had hoped to try and upgrade the broadcast team by trading for NBC’s Al Michaels, looking to (potentially) try and pair him up with Peyton Manning. On paper, it seemed like a home run. Too bad we’ll never know if it’d work or not, though, because NBC denied the request today, per New York Post‘s Andrew Marchand.

NBC Sports has declined ESPN’s initial request to engage in trade talks to acquire Al Michaels, according to sources.

Though NBC Sports executives have relayed the message to their ESPN counterparts, it can’t be ruled out that the topic could be revisited.

When Michaels was last traded 14 years ago in a deal involving Oswald The Lucky Rabbit, it took months to complete.

So, for now, ESPN’s Monday Night Football crew is still a bit uncertain, because, per Marchand, the sports network giant could come back and try to get Al Michaels again at some point this offseason. But first, they may need to lock up Peyton Manning first — something Marchand briefly gave an update on.

Meanwhile, ESPN has begun talks with Manning in hopes of signing him with or without Michaels, according to sources. Manning — who since retiring from playing has spent part of his time turning down networks — has not fully indicated yet if he wants to finally be a broadcaster.

As we all know, Manning has been a hot commodity in the broadcast department since he retired, with his name coming up each offseason as a potential candidate to join a network. That said, he still hasn’t showed much interest doing so, claiming that it’d be too difficult for him to call games with former teammates and his brother, Eli Manning, playing. Eli’s since retired, so, just maybe, the door’s opened a little bit more now.

In terms of a backup plan for ESPN now that they’ve appeared to miss out on Al Michaels, the network seems to be in scramble mode, with plenty of options on the table at the moment, per Marchand’s report.

ESPN has not yet informed Joe Tessitore or Booger McFarland that they will not return to “Monday Night Football.”

Though Tessitore and/or McFarland are not out yet, ESPN has formed several plans as it tries to figure out its Monday night booth. The Post previously reported ESPN’s interest in Philip Rivers. Rivers has said he intends to continue playing. ESPN passed on Kurt Warner for Jason Witten two years ago, but Warner is a name that can’t be ruled out.

For play-by-play, ESPN could try to look outside its ranks with CBS’ Ian Eagle or Fox’s Kevin Burkhardt. Both are under contract, but are No. 2s on their networks’ NFL play-by-play depth charts, so there might be a more amenable compensation scenario as “Monday Night” could be looked upon as a promotion. Kevin Harlan, who is CBS’ No. 3 on the NFL and calls Monday night games for Westwood One radio, could also be considered.

Following Tony Romo’s record-breaking deal to stay with CBS, ESPN’s Monday Night Football team is under pressure to get somebody just as knowledgeable and entertaining for fans. With Al Michaels all but out of the picture, Peyton Manning would be a helluva catch, but who sits beside him in the booth is just as critical.