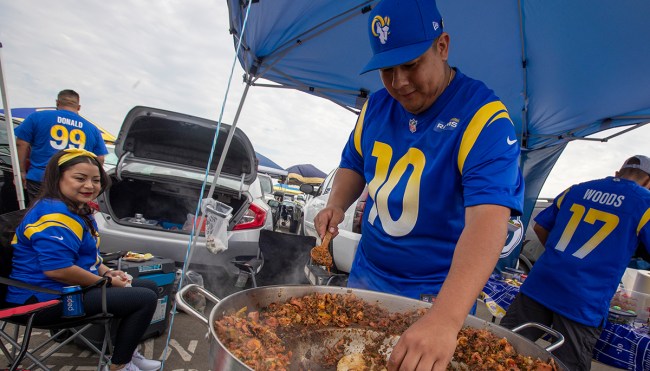 When the Rams faced off against the 49ers earlier this year, they found themselves caught a bit off guard thanks to the sea of San Francisco fans that flooded into SoFi Stadium to essentially neutralize the team’s already shaky home field advantage.

Matt Stafford admitted the hostile crowd noise played a factor in his team dropping that contest in overtime, so it didn’t come as a huge shock that the Rams attempted to prevent a similar deluge by requiring anyone who wanted to purchase tickets to the NFC Championship Game to use a credit card linked to a zip code in the vicinity of the Los Angeles metro area.

It didn’t take long for that master plan to fall apart in spectacular fashion (although Stafford’s wife Kelly is sparing no expense when it comes to making sure Rams fans can get in the building). Only time will tell if SoFi Stadium will be home to a sea of red on Sunday, but one thing does seem pretty clear: anyone who wants to park near the venue is in for a very rude surprise.

With the stadium’s official lots already at capacity, anyone who is driving to the game but lacks a pass will be forced to resort to other options—and as you can see, plenty of people have pounced on the chance to squeeze as much money out of the situation as they possibly can.

Prepaid parking spots within 1.5 miles of SoFi Stadium are being sold online now too:

– $498.23 for a spot in the garage of a nearby medical center. pic.twitter.com/SfpXD8QCMy

Parking is insane too😓 pic.twitter.com/XmB4onIkvQ

You’ve got to love the free market.