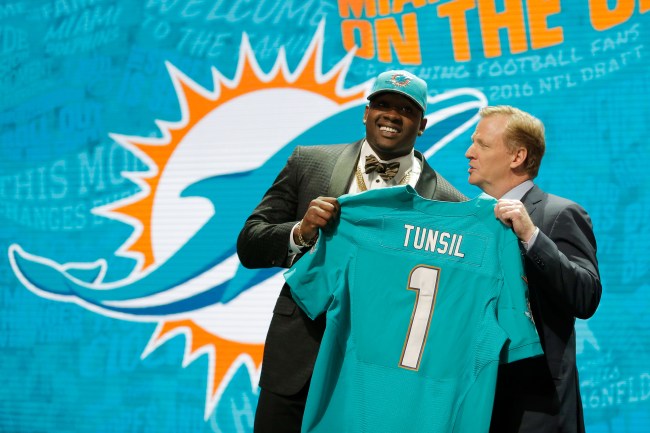 As the NFL Draft approaches, there’s a lot of uncertainty. Will there be wild trades, and could a team really move up to snag the No. 1 overall pick? Which prospects slide down the draft board for no apparent reasons? How will the virtual draft look, and are teams really concerned with their computers being hacked? Will a prospect be embarrassed by old social media posts popping up on the biggest night of their live?

While some of those are standard questions to wonder each year during the NFL Draft, the last one about prospects and their social media accounts is something the league is trying to get ahead of. As we’ve seen in recent years, players like Laremy Tunsil have gotten exposed on social media as the draft was taking place, which, no doubt, led to some teams overlooking him or questioning his off-the-field behavior. Remember, Tunsil was the guy who, in 2016, had a leaked video of him smoking weed in a gas mask.

Likewise, we’ve seen guys like last year’s NFL Defensive Rookie of the Year, Nick Bosa, get called out for old tweets he sent years ago. The list goes on and on, but, instead of the possibility of embarrassment this year, the league is suggesting agents tell their clients to “proactively scrub” old tweets, per Mike Florio of Pro Football Talk.

Per a league source, the NFL therefore has advised agents to “proactively scrub” negative tweets from prospect accounts, to ensure that none of these messages surface “during this critical time.”

It’s something the prospects and the agents should have done anyway, and there have been plenty of past examples regarding the consequences of a failure to do so. The league apparently has gotten involved because it plans to highlight old tweets in a positive way during the draft. Once that door swings open, the league doesn’t want any of the old tweets that reflect on the player in a negative way to emerge.

The league also has provided specific instructions to agents on the procedure for harvesting old tweets, reviewing them, and getting rid of any that may cause problems.

The message from league is simple: During this time in the player’s life, the press should be only positive. So, basically, go ahead and remove anything that may cause negative press for the players.

I never thought I’d say this, but, sheesh, this is actually a brilliant idea by the league, hoping to keep the NFL Draft positive and not have wild stories about what a prospect said while 13 years old dictate his overall character. For any of us who remember the Tunsil incident, that was an uncomfortable disaster, as everyone who watched the NFL Draft saw him sinking in his chair as teams made their picks.

Luckily, none of the past examples in real-time hurt a prospect too much — Tunsil was selected No. 13 in 2016 an Bosa still went No. 2 in 2019 — but it’s smart for the league to get together and make sure nothing like this happens in the 2020 NFL Draft. Plus, if the NFL truly is using the narrative of previous tweets for players as a way to promote their journey, it shouldn’t be sandwiched between some random thing that was sent at 3 a.m. while drunk as a freshman in college.