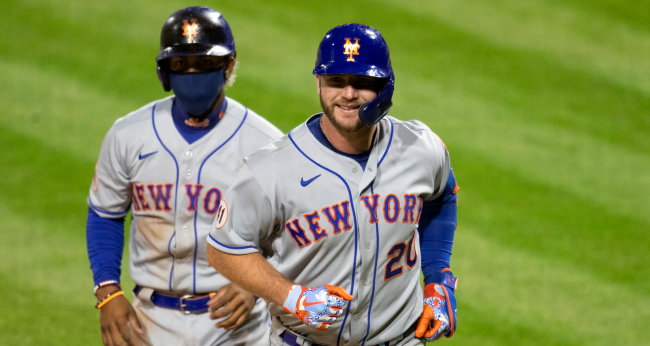 Tuesday night in the top of the ninth inning New York Mess Mets slugger Pete Alonso was stepping up to the dish when a fan reminded him what the over/under for the game was.

“Hey, Pete! The Over/Under Is 9!” the fan can be heard yelling at Alonso from the less-than-packed stands.

Considering the Mets were already up 6 to 2 with just three outs to go to seal the win, Alonso granted this fan at at Citizens Bank Park’s wish and sent one flying for a two-run homer, pushing the game’s score over the magic number.

In the bottom of the ninth, just to make sure this fan and anyone else who bet the over got paid, Alonso then proceeded to make an error, nudging the score up even higher, eventually ending with a 8 to 4 win for the Metropolitans – their first victory of the 2021 MLB season, and first for new owner Steve Cohen.

After the game, Mets manager Luis Rojas snagged the baseball from Albert Almora Jr. who caught the final out and said the team will present it to Cohen before the home opener Thursday.

“I just want to say congratulations to our owner Steve Cohen,” Rojas said after game. “This is his first win as our owner, the first of many to come.”

Of course, anyone who bet the under in the game was not nearly as pleased with Alonso’s power display.

If you bet the under in a game that involved the Mets bullpen, you deserve to lose your money