According To This Bogus ‘Hall Of Fame Monitor,’ Peyton Manning Bests Tom Brady As The GOAT 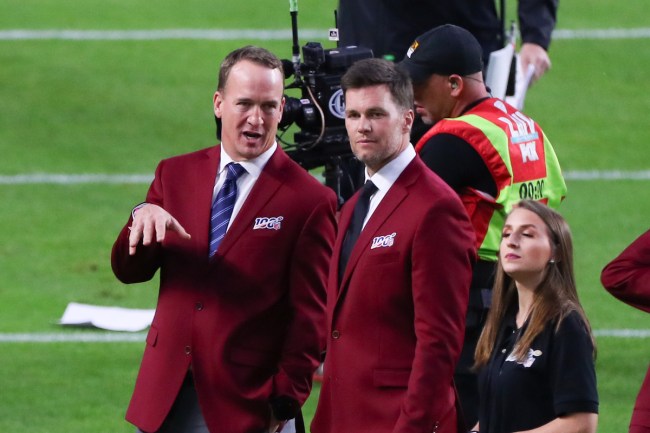 See that image above? Yeah, I wonder if Peyton Manning’s talking crap to Tom Brady about he, not the Buccaneers quarterback, is actually the NFL’s GOAT at quarterback? Considering the history between these two — which involved plenty of head-to-head matchups and a mutual respect for one another — one can’t put it past Manning.

And while most of us have already declared that Brady is the greatest quarterback ever, especially after dominating Super Bowl 55 to capture his seventh Lombardi Trophy in 10 chances, the people over at Pro Football Reference have something to say about that.

Thanks to a “Hall of Fame Monitor” from the informative site — which was launched in 2019 — Peyton Manning bests Tom Brady as the GOAT, and it’s not even particularly close. Take a look at the results below of some all-time great signal-callers, which calculates an approximate value based off of a player’s Pro Bowls, All-Pros, championships and other career milestones. The results are then displayed as a point system.

Now, look, mad respect to Peyton Manning and all the individual accomplishments he achieved during his illustrious career — which included holding a bunch of passing records when he retired in 2016 — but, c’mon, how can his two Super Bowl victories even come close to matching Tom Brady’s seven? Oh, right, they can’t. Not to mention Brady now holds or ranks second in key categories like all-time passing yards and passing touchdowns, so, even there, TB bests Manning.

The only player with more overall points in this (somewhat bogus) “Hall of Fame Monitor” is wide receiver Jerry Rice, who lands an overall score of 311.81 points. There’s no denying Rice is the best wideout of all-time — unless you’re Randy Moss, of course — and, to some, he really is the NFL’s GOAT.

But when it comes to the best quarterback in NFL history, with all due respect to Peyton Manning, nobody can convince me that it’s not Tom Brady. Not even some weird calculation that uses math and numbers and some algorithm that my little pea brain can’t possibly comprehend.