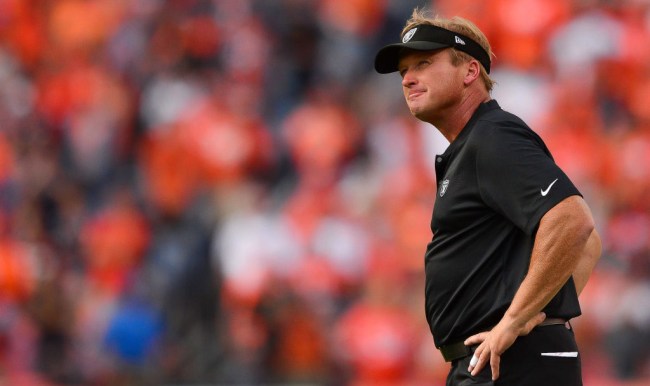 Welp… that certainly didn’t take very long. It looks like the honeymoon between Oakland Raiders fans and their ole ball coach Jon Gruden is officially over.

Quite a swing in opinion from back in January when Gruden was re-hired to coach the team he took to back-to-back AFC West titles in 2000 and 2001 and set up for a Super Bowl win in 2002.

Unfortunately, for Raiders fans, Gruden signed a 10-year, $100 million contract so he isn’t going to be going anywhere for awhile. On the plus side, at least the Raiders didn’t offer him the stake in ownership that was rumored (we think).

Many fans, including myself, were very excited at the prospect of Gruden being back on the sidelines, especially with the Raiders imminent move to Ls Vegas. Can you imagine Chucky in Vegas? In this stadium?

Gruden certainly hasn’t done much to endear himself to Bay Area fans so far.

He cut potential Hall of Fame kicker Sebastian Janikowski after 18 seasons with the team.

Then he cut fan favorite Da Punt Gawd Marquette King despite his averaging 46.8 yards per punt over his six years with Oakland.

Then they HATED his pick of offensive lineman Kolton Miller in the draft.

Then he inexplicably traded All Pro Khalil Mack to the Bears in a trade that even Madden 19 rejected.

Then he was the only person in the world to be shocked when Mack started tearing it up in Chicago.

Then he copied Pete Carroll and passed instead of giving the ball to Marshawn Lynch at the one-yard line, resulting in, you guessed it, an interception.

And then, if the refs hadn’t handed the Raiders a win over the Cleveland Browns on a silver platter, the team would currently be sitting at 0-6 on the season.

So yeah, the honeymoon is definitely over.

Proof of that is a new website that some Raiders fan(s) created that will be counting down, not the days, but the seconds until Gruden’s 10-year contract expires.

Tell us how you really feel, Raiders fans?

Is Gruden Gone Yet? Is now a website. And it's glorious. https://t.co/81HzNkCr8g pic.twitter.com/4wBx9Manv0

The site also keeps a running total of how much money Gruden has made from the moment you arrive on the site, as well as how much he is still owed.