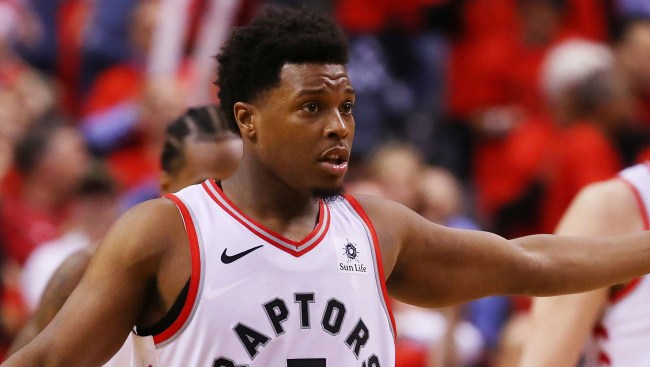 Toronto Raptors point guard Kyle Lowry had everything set up for him to be a hero Monday night at the end of Game 5 of the NBA Finals. Down by one, clock winding down, chance to win the NBA Finals, gets a good look at the basket, and… he missed the shot very badly.

Kyle Lowery, on the other hand, was nowhere near Scotiabank Arena Wednesday night.

That didn’t stop him from joining the ranks of people blamed for things they did not do like what happened to folks with names similar to Eric Weddle, Michael Cohen, Ben Roethlisberger, Aaron Gordon, Jon Jones, Dee Ford, Zane Gonzalez, Chris Conte, Zion Williamson, and others.

It’s something that happens so often now that if you have a name similar to someone famous, and they do something people don’t like, you might as well just play along. That’s what Kyle Lowery did and it was pretty great.

It couldn’t have been easy. Take a look at this venomous tweet.

That one tweet triggered SOOOOO many comments trying to correct it.

Mans really be out here using tagging the wrong person

Some people still didn’t get it.

He was wide open from the corner and only hit the side of the backboard.

I was feeling the same shit man

The shot was blocked chill out 🤦🏽‍♂️

Fredo, Klow is trash bro I would ride with a 35-year-old CP3 over him, dude is overrated

Me after I put my phone across the room and listening to it blow up pic.twitter.com/SMbIMxNwyc

It’s not the first time he’s been tagged for something the “other” Kyle did either.

As long as y'all think @DeMar_DeRozan and @kylelowery17 are the 1s that's gonna lead y'all to a chip, y'all are gonna continue to fire head coaches. Bc they're not chip caliber players. Hell, they're not even conference championship material

PLAY BETTER NEXT GAME, GUY WHOSE NAME IS SIMILAR TO AN NBA PLAYER.

It wasn’t all bad though.

. @ochocinco retweeted my tweet. I’ve done everything in life I’ve set out to do