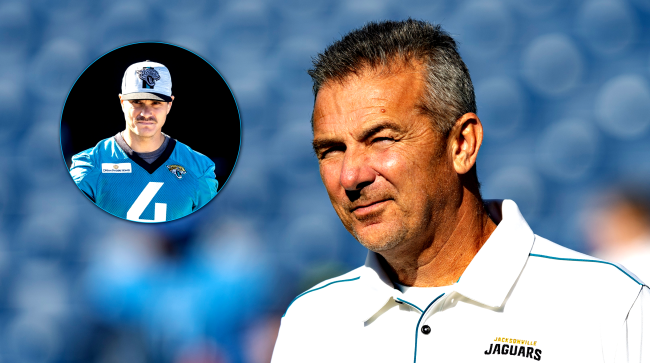 Last week, despite what Jacksonville Jaguars owner Shad Khan’s claims, the final straw in the tenure of Urban Meyer as head coach of his football team occurred when Rick Stroud of the Tampa Bay Times published a story about how the coach physically attacked former kicker Josh Lambo.

The report claimed that Urban Meyer kicked Lambo while he was stretching with his teammates during the final week of the 2021 preseason.

Shortly thereafter, the Jaguars announced that they were firing Urban Meyer after 13 games with a less than desirable 2–11 record.

Related: Jimmy Johnson Offers Up Excuse As To Why Things Didn’t Work Out For Urban Meyer In Jacksonville

On Tuesday, Rick Stroud spoke with The Rich Eisen Show and revealed even more details surrounding the story.

“Nobody is disagreeing the event happened,” said Stroud about the Lambo incident. “It’s just to what degree. If we’re talking about how hard he kicked a guy, that’s not a great argument on his behalf in my opinion.

“But when you hear the language, the bullying that goes on, not calling specialists by their names, you know this sort of… I mean I can only imagine what 18 through 21 year olds reacted to when they’re going through it at Bowling Green or Utah or Florida or Ohio State, but it doesn’t work at this level with professionals and he was his own worst enemy from the get-go.

“So it’s ironic, I think, that a specialist may have been the last straw, something that happened back in August.

“All I can say is when I did the story, they were in crisis mode in Jacksonville,” Stroud continued. “I had a lot of conversations with them. They begged me to hold the story till 4 o’clock. I got a statement from their legal counsel first. I got a threatening letter from his [Meyer’s] attorney about publishing the story without certain information. We waited for their statement.

“And in the end, Shad Khan said he decided last Sunday or Sunday before that, to fire him, but I don’t know why you fire a guy on a Wednesday after you let him go through a practice, then disappear from the meeting.

“So none of this adds up to me.

“The organization is totally dysfunctional. They turned it over to a guy who wasn’t capable of making the transition to the NFL and he in the end I think he got what he deserved.”

“So what happened… They wanted to offer up a couple of players, but only off the record to corroborate not that he didn’t kick him, but to the degree that he kicked him,” Stroud explained.

“During this whole drip, drip, drip process, everybody was using sources. (Meyer said) ‘Who are these people? If I catch the source, they’re gone.’ When the Jaguars organization was under fire, they want to offer up unnamed sources and players who will back the coach. (Lambo) was a guy who showed enough courage to put his name on the incident and speak on the record.

“I was willing to speak to them… It’s funny, because during this whole drip-drip-drip process, everybody was using sources. ‘Who are these people? If I catch this source he’s gone tomorrow.’ You hear this stuff from the Jaguars organization. Then when their guy’s under fire, they want to offer up unnamed sources and players that will back the coach, which is fine except that this was a guy who showed enough courage to put his name on the incident and was willing to speak on the record.”

“He came off the practice field, his coaches didn’t know why he wasn’t in the meetings, after that they were in complete scramble mode since 8:30 that (Wednesday) morning,” Stroud said.

“I spoke numerous times to people about the details of the story, provided them with everything I had,” he continued. “They wanted an extension before we published until 4 p.m. We delayed it until 4:30. They were in scramble mode. This didn’t sound like a guy the owner had fired on Sunday. To what extent that contributed to it? I saw the reaction to the story from people. Maybe that had some impact, but Urban Meyer was solely focused on keeping his job because of Lambo’s comments and they had plenty of advanced notice about what that story would say.”

Listen to the entire interview below.