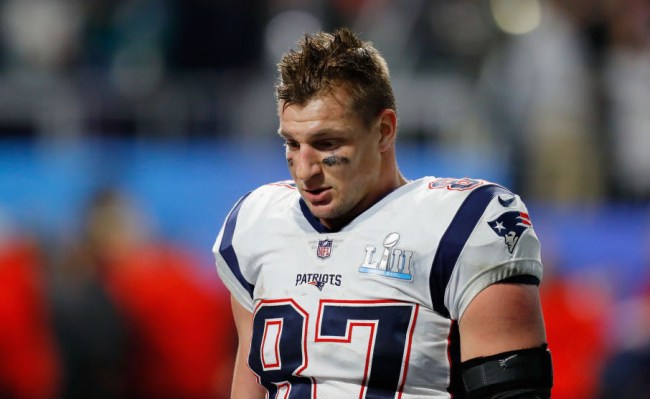 Plenty of Patriots fans were optimistic Rob Gronkowski would stick around for at least one more season after helping New England bring home another Super Bowl but it didn’t really come as much of a surprise when he announced he’d be stepping away from the game last spring.

In the months that followed, we got some insight into the rationale behind his decision as he provided some information concerning the toll the game took on his body—including the estimated 20 concussions he suffered over the course of his career (although he claimed he managed to “fix” his CTE, which is exactly what someone with CTE would say).

However, there were (and still are) plenty of people who questioned whether or not Gronk was actually serious about hanging up his cleats for good and there’s been plenty of speculation that he may mount a return at some point.

Last week, we learned the tight end still hasn’t filed his retirement papers, but on Monday, Tom Brady said he had no reason to believe his former teammate would be staging a comeback during an appearance on The Greg Hill Show.

On Tuesday, Gronk appeared on the same program and essentially put any speculation to rest while addressing the topic for approximately the millionth time by saying he doesn’t have any desire to return to football (at least at this point).

Rob Gronkowski on @TheGregHillShow asked again about what it would take to return: "I would have to be feeling it — mentally, physically. … Like a couple of weeks of me feeling it, like I need to play football again."

You're not feeling that now?

.@GregHillWEEI to Rob Gronkowski: Do you miss football?

Gronk: "No, I am very satisfied where I am at."

Added he started thinking about retirement over the last year or two.

Earlier this week, CBS Sports reported Gronk will have to file for reinstatement by December 7th if he wants to make his triumphant return, but for now, he seems to be perfectly content cracking jokes about nuts after taking on a new role as an analyst with Fox.