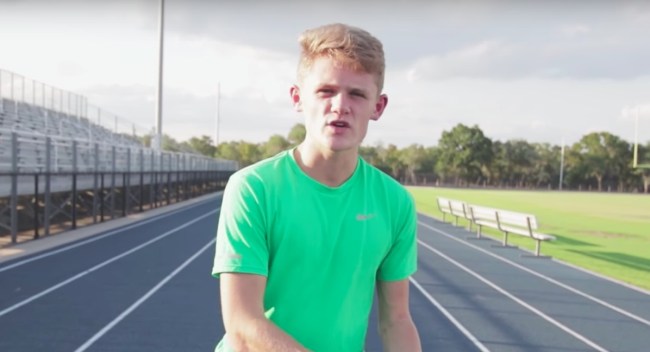 The NCAA is a soulless fun suck of an organization that generates a billion dollars in revenue every year and has a reputation for getting mad whenever one of the student-athletes responsible for allowing it to earn so much has the nerve to try and make some money of their own. It is, in essence, the IRS of the sporting world.

Over the summer, (now former) UCF kicker Donald De La Haye was forced to decide between his YouTube channel and his playing career because he was “using his likeness” to generate revenue on his personal YouTube channel. La Haye opted to keep his 90,000 subscribers and dropped a savage diss track in the wake of the incident.

Now, Texas A&M cross country runner Ryan Trahan is facing a similarly difficult decision. The 17-year-old freshman and entrepreneur is the owner of a water bottle company who uses his YouTube channel to talk about the world of running and promote his brand. However, as he revealed in a recent video, the NCAA is apparently not a fan of people who can successfully balance running a company with life as a student-athlete.

In, the video, Trahan reveals the NCAA has given him two options:

““I can… be a runner that does not own a company, I can make no references to my company but I can post running videos and let people know that I go to Texas A&M and I’m on the cross-country and track team. But I can have no reference… to my company.

NCAA rules state that athletes can run their own business if it’s “not based on their athletics reputation or ability.” As of now, Trahan is currently ineligible to participate in athletic activities, but he has filed a waiver to become reinstated. Given the NCAA’s long history of logic and reason when it comes to cases like these, I’m sure he has nothing to worry about.