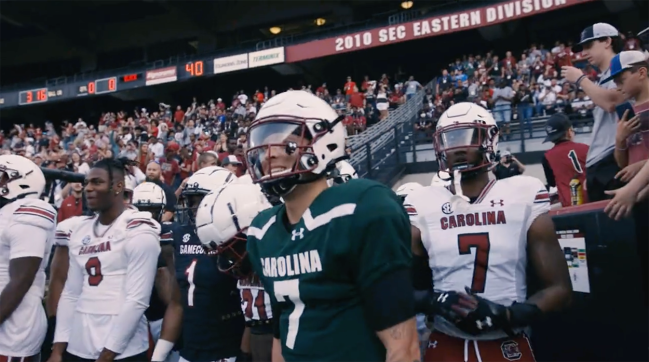 Ever since Spencer Rattler burst onto the scene as a five-star quarterback on ‘QB1: Beyond The Lights,’ he has been met with constant scrutiny. His character (whether rightfully or not) has been questioned, his talent has been doubted and the haters have hated.

After arriving on campus at Oklahoma in 2019, his time in Norman was quite the rollercoaster.

At the highest of highs, he and the Sooners won the Big-12 and a Cotton Bowl over Florida. At the lowest of lows, he was benched in favor of Caleb Williams and chose not to celebrate with his team after his replacement led the largest comeback in Red River Shootout history.

Now, in what is likely his final year on the collegiate level, it seems like Rattler has his swagger back.

Rattler entered the transfer portal at the end of the 2021 regular season and later committed to play at South Carolina. Since arriving in Columbia, the 21-year-old shut down the haters, put on weight, and turned a new chapter in regard to his maturity.

On the field, Rattler has impressed his new teammates during practice and the coaching staff is thrilled with what they have seen. In fact, his best throw at the Gamecocks’ spring game makes it nearly impossible not to buy the hype.

To close out South Carolina’s spring practice period, Spencer Rattler was mic’d up during the spring game.

Rattler is no stranger to cameras or microphones, but it was clear that he was just being himself as he stepped out into Williams-Brice Stadium in front of fans for the first time. And despite all of the negativity that has surrounded him throughout his career, Rattler was extremely likable.

In a 10-minute video released by the school, he showed a few different sides. Before the team took the field and during warm-ups, Rattler is loose, having fun, singing and dancing.

When the game begins, he’s all business. Rattler had a clear command of the offense, his communication with teammates was kind and natural, and — perhaps most importantly in terms of wins and losses — he balled out.

No matter what your opinion of Rattler may be, it would be hard not to change your tune after seeing him mic’d up during the spring game. Perhaps this is the year that the Arizona-native makes the next step and re-enters the Heisman Trophy conversation as something more than just a preseason candidate?