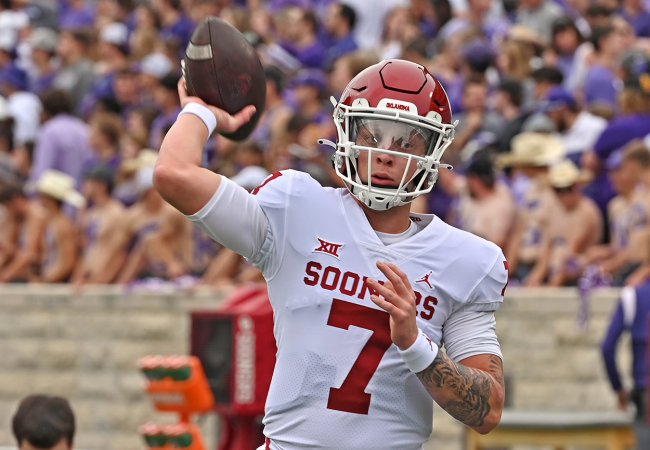 Spencer Rattler is one of the most polarizing players in college football. The former five-star recruit has been in the media since he was in high school and the spotlight follow him wherever he goes.

It all started back in high school when a clip from QB1: Beyond The Lights painted Rattler and his attitude in a negative light.

And then, when Rattler ruled ineligible for football participation after violating a district code of conduct, the attitude concerns only continued to grow. The nature of the violation was never disclosed, and it did not involve drugs, but the questions remained.

When Rattler reached the collegiate level, the scrutiny was magnified.

After balling out as a redshirt freshman at Oklahoma, Rattler was benched in favor of Caleb Williams last season. After the decision was made to turn to Williams, Rattler didn’t help the narrative.

Rattler’s reaction to Williams’ immediate success in the game that he was replaced was not particularly positive. He also chose not to celebrate with his team after Williams led the largest comeback in Red River Shootout history.

In addition, in the week following his benching, Rattler stepped away from the team instead of showing up to compete for his job back. While understandable, it was not a great look.

Ultimately, the Arizona-native showed great maturity in the backup role amid the character concerns, but the stigma doesn’t just disappear. People are still quick to jump on Rattler for anything and everything negative.

That remains the case now that he is at South Carolina.

In fact, the pressure for Rattler to compete and be a leader might be greater now than ever before.

The 21-year-old former preseason Heisman Trophy candidate is back on some of those lists prior to 2022. His goal is to ball out for one year with the Gamecocks and reestablish his NFL Draft stock. From there, he has aspirations of being a first round pick.

In the meantime, he is trying to change the narrative about his bad attitude. Rattler recently spoke with the media and discussed how he has matured as a player.

Much of the conversation was directed toward his on-field play. However, he also discussed his mindset.

“I just feel more mature on the field with my preparation, how I’m going about things I want to improve in my game,” Rattler said. “All different types of areas but I’m still the same me, still got the same mindset. Confident, ready to attack and that’s been my mindset the first three or four practices and going to be my mindset going forward.”

Earlier this month, prior to spring practice, Rattler said that he is feeling totally refreshed. He has a new start with a new program and a new fanbase.