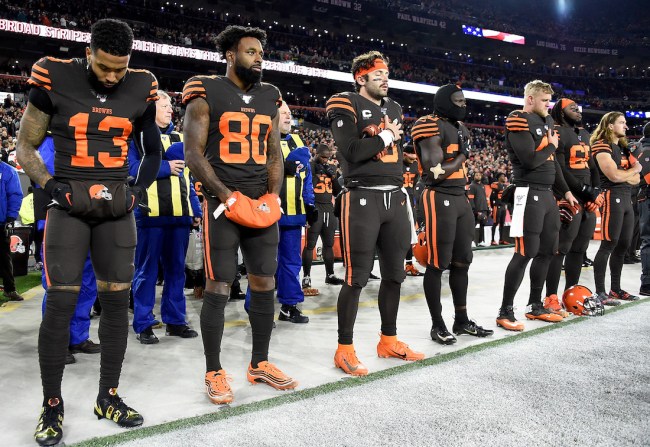 As a casual sports gambler myself, I know the temptation that going big to win money can bring. Hell, just the other day, I specifically told my fiance I was forever done betting on sports after a NBA daily fantasy lineup I thought could win some cash ended up falling flat on its face — all because Dwight Powell didn’t play more than about 10 minutes for the Dallas Mavericks. Talk about a serious buzzkill.

My personal story aside, many people who enjoy sports betting know that it’s not easy winning money. But, hey, that’s not going to stop them from trying to find the one lucky gamble that can bring serious returns. Just look at all those sports gamblers who bet big on Phil Mickelson to win the PGA Championship. It’s safe to say they’re all really happy right now.

While every bettor is digging deep to try and find the one outcome that can win big, there are some gambles just not worth taking.

For instance, take this person who bet $700 on the Cleveland Browns to finish with the worst record in the league during the 2021 NFL season. Sure, the money spent isn’t a ton, but, man, it just sort of seems like the cash could be better spent — especially when considering the payout is $175,000. That’s not exactly life-changing money, guys.

It would payout $175K 😅 pic.twitter.com/1JFe9ADluO

Now, look, the NFL season always delivers surprises that are unforeseen. The Browns reaching the postseason last NFL season was something many probably didn’t think would happen, so, who knows, maybe this sports gambler gets lucky and the franchise returns to a spot it’s been used to over the past two decades: As one of the league’s worst teams.

But with Baker Mayfield, Myles Garrett, Odell Beckham Jr., Nick Chubb, Jarvis Landry, and a ton of other talented players on both sides of the ball, some see the Browns as a legit Super Bowl contender, not a team vying for the No. 1 overall pick in next year’s NFL Draft. Weirder things have happened, though — re: Phil Mickelson’s PGA Championship victory.

While anything is possible when betting on sports, there aren’t too many people on Twitter who believe this particular sports gambler laid down a good choice here. The reactions on social media prove that.

If he wanted a better bet for $700 to win almost 175k, he would’ve bet Browns-WFT SB matchup at +23000. Longshot but this one has a much better chance of hitting than the Browns having the worst record in football… top 2-3 team in the AFC imo

We found the bettor pic.twitter.com/7fGgBPQLAe

Dude probably just got out of prison after 5 years

Might as well burn the money. Top 5 roster excluding the QB position. If Baker progresses they will be a really fun team to watch.

When it comes to sports betting, you can’t win if you don’t play. So kudos to this gambler for really trying to pull a rabbit out of a hat with this Browns bet.

Unfortunately, with a roster talented enough to win the AFC, the sports gambler shouldn’t necessarily expect a big payday. The Browns aren’t the same ol’ Browns, folks. Maybe this person didn’t get the memo. Or maybe they really have a crystal ball nobody else does.