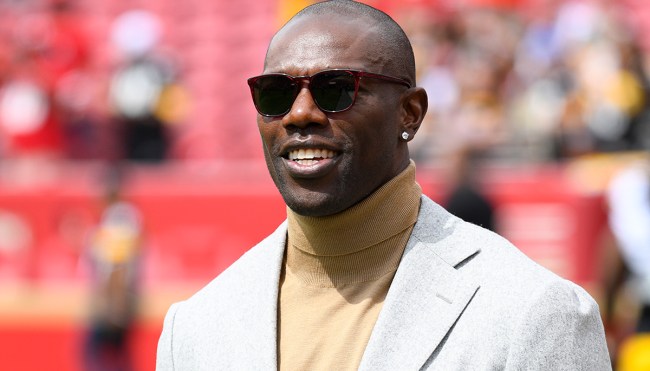 Terrell Owens’ time in the NFL didn’t come to an end in the way he would’ve hoped, as the electric wide receiver played what would ultimately be his final snap in the league in 2010 as a member of the Bengals before falling victim to an offseason ACL injury that effectively brought his 16-year career to an end.

In the years that followed, Owens would attempt multiple comebacks with not only the NFL but the CFL and the Indoor Football League, but none of them panned out as envisioned.

It’s not exactly hard to figure out why teams haven’t jumped at the opportunity to sign a wideout who turned 48 in December—although Owens was able to turn on his still-impressive jets a couple of years ago in a race against Tyreek Hill and managed to make some highly-touted recruits look absolutely foolish when he stopped by a camp organized by Deion Sanders last summer.

Last week, Owens announced he’ll soon be (at least technically) returning to the sport after coming to an agreement with Fan Controlled Football. However, if he could’ve had it his way, he would’ve landed a slightly more prestigious gig last year as a member of the Kansas City Chiefs.

On Wednesday’s episode of The Pat McAfee Show, Owens revealed he spent a good chunk of the previous season bugging the hell out of Andy Reid over text as he attempted to convince the man who deactivated the wide receiver from the Philadelphia Eagles roster in the middle of a tumultuous 2005 season to give him a shot.

"I was blowing up Andy Reid's phone last season to bring me in.. you insert me in that offense & I'm gonna be a viable option" ~@terrellowens#PMSLive pic.twitter.com/7n8uKMEwOL

Here’s what he had to say via The Kansas City Star:

“I talk extensively time to time with Andy Reid, who coached me when I was in Philly. I was blowing his phone up throughout the course of the year.

I’m like, ‘Dude bring me in, bring me in.’ You know what I mean? But they brought Josh Gordon in and he didn’t do anything. And I’m like, I can do what Josh Gordon was doing which I mean, he didn’t amount to anything really. And that’s not to say anything bad about him…

“You look at the last game that they played … against the Bengals and they’re in overtime… Third down, red-zone situation, Patrick Mahomes, he couldn’t find anybody in the red zone. You insert me into that offense. That’s where I just said I would be valuable.”

Again, it’s pretty easy to figure out why Reid and the Chiefs decided to pass, but you have to respect the hustle.