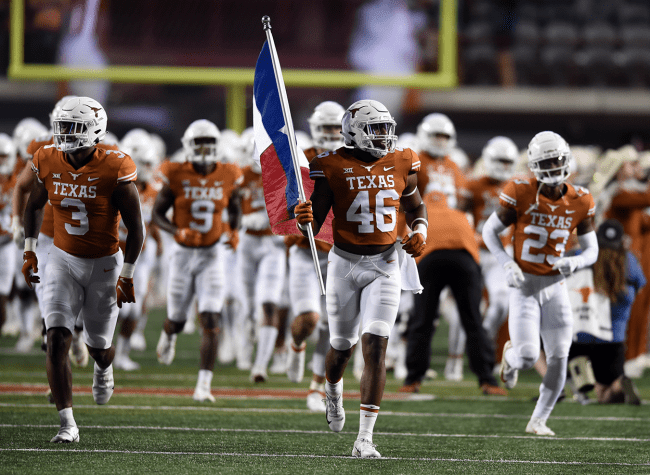 College football recruiting is completely different than it was just 10 years ago. While the same crazy, behind-the-scenes antics continue as they always have, social media presence has become a crucial component to the process.

Every school across the country is in the middle of a media arms race. Programs are trying to hire the best videographers, photographers and designers to take their social games to the next level.

The push toward social media and online clout has resulted in a lot of good. Take Notre Dame’s cathedral shoot, a recruit dunking on his own dad, a five-star quarterback taking pictures in a G-Wagon, and Lane Kiffin taking extremely icy pictures with recruits in his Aston Martin for example. It has also led to a lot of bad, like Dabo Swinney sitting on a recruit’s lap and Brian Kelly grinding on high schoolers.

On the positive side of things is Texas’ most recent photoshoot with two important cornerback recruits.

The two of them were on campus over the weekend and took an icy cold photo. They stood, in uniform, in front of a Kevin Durant (an alumnus of the school) photo wall with prime lighting, wearing sunglasses.

Hampton even took it up a notch and put on a ski mask and cowboy hat. It goes crazy, take a look:

Enjoyed My Time at my 3rd Home !!#HookEm pic.twitter.com/ZULBn24jbx

There is a lot of time for things to change in each of their recruitments, but the love for Texas is real and the visit photo is ridiculously hard.