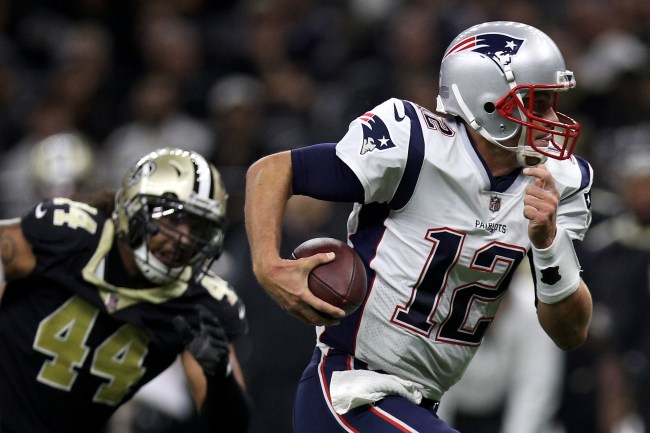 Tom Brady’s the GOAT, accomplishing things at 41 years old that people half his age could only dream of doing. Whether that’s snagging himself a supermodel wife, winning six Super Bowl rings or staying in shape and performing at a high level, Brady’s pretty much got things figured out for himself. And while it was reported that the future Hall of Fame quarterback was bulking up this offseason, it turns out that Brady might actually be getting faster, too.

That’s because a video surfaced of the soon-to-be 42-year-old Tom Brady running the 40-yard dash in a faster time than he did at the 2000 NFL Combine — which is one of the most classic videos ever, given his lack of athleticism 19 years ago. Take a look at a side-by-side comparison of the two 40-yard dashes from then and now, with Brady’s most recent time being 5.17 second compared to the 5.28 seconds in 2000.

Now let’s not get too carried away here, because 5.17 seconds for a 40-yard dash isn’t exactly setting the turf on fire, but, given Brady’s age and, uh, stone-like feet, this is pretty damn impressive. After seeing how Tom Brady did in the recent 40-yard dash time, Twitter was thoroughly impressed; so here’s what some people were saying after seeing the video.

Tom Brady just ran his 40 a hundredth of a second faster than his rookie year 20 years ago.😂this man

always working on Getting better Even after ALL he has Already Accomplished a TRUE COMPETITOR !!!

So, #tombrady ran a better time in the 40 this week than he did during his @NFL combine. #respect 🐐

Say what you want to about this whole TB12 method that Tom Brady preaches, but if it’s helping him shed time off his 40-yard dash at 41 years old and is keeping him lean and agile, maybe it’s time more people trust in the thing. While most slowly rot away as they get older, Brady continues to age like a fine wine, showing that he’s getting stronger, faster and better with each passing year. It’s kind of unfair, but, hey, it’s what makes him the damn GOAT, so you’ve just got to accept it.