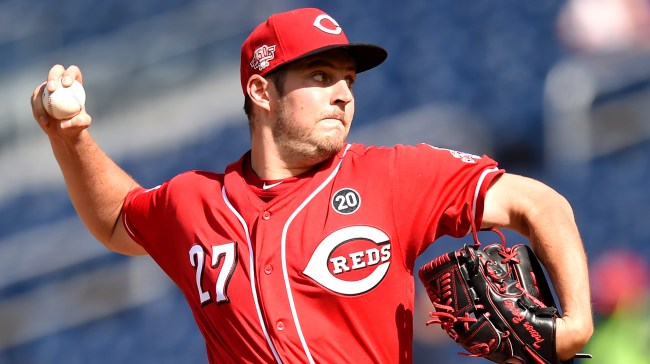 It must be crazy former professional athlete day today because now we’ve got ex-Major League Baseball player slash noted crackpot Aubrey Huff getting into a profane argument with outspoken current MLB pitcher Trevor Bauer about the ridiculously bad negotiations that have been taking place between the owners, commissioner and MLBPA.

In case you missed it, and I wouldn’t blame you if you did, the latest proposal put forth by Major League Baseball owners of a 60-game season was roundly rejected (again) by the players, this time by a vote of 33 to 5.

Now, with almost zero chance that the impasse between the players and owners will be rectified in time to actually hold a season in 2020, everyone is waiting for the worst commissioner in professional sports, Rob Manfred, to formally implement a mandatory shortened season to begin at some point in the next few weeks.

MLB owners already voted unanimously on Monday night to do so with a 60-game season that would start on July 24. The players now have until 5 p.m. on Tuesday to respond.

“In view of this rejection, the MLB Clubs have unanimously voted to proceed with the 2020 season under the terms of the March 26th Agreement,” read a statement from the owners. “The provisions listed above will not be operative.

“In order to produce a schedule with a specific number of games, we are asking that the Players Association provide to us by 5:00 p.m. (ET) tomorrow with two pieces of information. The first is whether players will be able to report to camp within seven days (by July 1st). The second is whether the Players Association will agree on the Operating Manual which contains the health and safety protocols necessary to give us the best opportunity to conduct and complete our regular season and Postseason.”

Those provisions included a universal DH for two years, guaranteed $25 million in playoff pools in 2020, $33 million in forgiven salary advances, and removing the proposed expanded postseason in 2021.

Earlier in the day, Bauer expressed his frustration with the owners’ negotiating tactics.

Now, to voice my personal opinion, and in no way am I speaking on behalf of any other players or the union as a whole, I believe there is a deal to be had here that is beneficial for everyone involved and I’m honestly not sure what the hold up is. What’s the exasperated emoji??

It’s absolute death for this industry to keep acting as it has been. Both sides. We’re driving the bus straight off a cliff. How is this good for anyone involved? Covid 19 already presented a lose lose lose situation and we’ve somehow found a way to make it worse. Incredible. 🤦🏻‍♂️

If there’s going to be a fight the time for that fight is after the ‘21 season when a new CBA is negotiated. 5 years of potential change. We’re doing irreparable damage to our industry right now over rules that last AT MOST 16 months. WTF kind of sense does that make? 🤦🏻‍♂️🤦🏻‍♂️🤦🏻‍♂️

I have so much more I want to say about this whole thing but out of respect to my fellow players I’m going to continue holding my tongue. If any of you would like to talk about it please hit me up privately.

Trying to tell someone not to tweet is…shall we call it, odd…coming from you Aubs. Here, have some more attention. I’ll forward some followers your way. https://t.co/GFPyotbEPE

Which eventually led to a profane back-and-forth free-for-all.

Oh no a random twitter account word vomited at me whatever shall I do. Apparently connecting with fans is a bad thing these days, who knew 🤷🏻‍♂️ thanks for recognizing my brand building ability though Aubs. About the nicest thing I’ve ever seen you tweet ❤️ https://t.co/Xw00KroXkQ

The fact you said in your 1st tweet, “I’ll forward some followers your way,” tells me everything I need to know about you @BauerOutage. You’d rather build a brand than win. That’s why I have 2 World Series rings & you jerk off to analytic spin rate geek fans like @keithlaw. @MLB https://t.co/ft4JTb2RzH

Those are cute participation trophies you have there Aubs! Thanks for sharing! Proud of you little guy! https://t.co/n6g8Suiyv1

I come with receipts. Fun fact, seems I was a better amateur than you were too 🤷🏻‍♂️ how does it feel to be dunked on by someone who is...what did you call me...low t? pic.twitter.com/60wRcSRXlU

Hey sugar tits where you getting your nerd stats from? I had no idea what my career @mlb war was until you mentioned it. So I had to check it out. Maybe research before you tweet @BauerOutage. https://t.co/6C51tCZRk4 pic.twitter.com/QMCnolpQeE

That drone injury to your hand in the 2016 World Series must have played a big part in that 0-2 record & 5.40 ERA. I’m sure your @Indians teammates were thrilled with that cool hobby of yours @BauerOutage. The @Cubs players & fans thank you! #participationtrophy 🏆 https://t.co/D2NWfgsowI

Then Curt Schilling got involved, because of course he did.

Trevor, what are you doing man? Walk away. 17.4 WAR for a pitcher, a good pitcher, is like 2 seasons right? Just focus on getting guys out, winning a world series. https://t.co/SKkz8XzXh4

I have to tell you. I’ve tried and I am still not exactly sure what it was those two were arguing about.