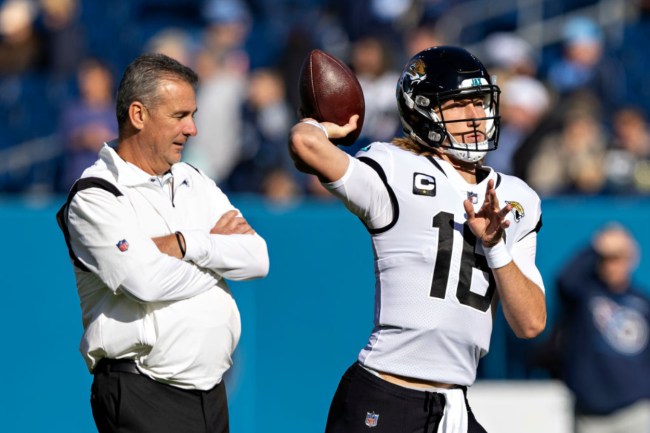 Trevor Lawrence is smart enough to know that his rookie campaign with a first-year NFL head coach wasn’t going to be perfect nor easy. On the flip side, there’s no way he expected Urban Meyer to operate the way he did in Jacksonville, he admitted as much after Meyer was fired by the Jaguars.

“I wouldn’t believe you if you told me this is how this year was going to go,” Lawrence explained, via the New York Post.

Lawrence also tried to say he didn’t feel relieved after Meyer’s firing, but you can tell that that’s exactly how he feels.

I think it [the coaching change] brings a little bit of clarity to the guys in the locker room. I wouldn’t say relief, but I would say just bring some clarity and some direction moving forward.”

Lawrence certainly doesn’t sound like a guy that’s going to miss Meyer in Jacksonville, and someone who was ready for new leadership.

There was plenty of outside noise created by Meyer. The laundry list he wracked up not even coaching a full season was overwhelming, to put it lightly.

It started with the hiring and subsequent resignation of Chris Doyle (who was canned for allegedly making racist remarks) which was quickly followed up by the signing of a washed-up Tim Tebow to play tight end.

Then you have the infamous bar video, which saw Meyer grinding with a woman that wasn’t his wife. He reportedly called his assistant coaches losers, lied about his confrontation with Marvin Jones Jr., and allegedly kicked Josh Lambo.

Lawrence Was Fed Up With The Outside Noise

It would be impossible for Lawrence or any of his Jacksonville teammates to completely shut out that outside noise. Lawrence explained everything was made more difficult given the added drama.

“And there’s a lot of things being stirred up I think by the outside, too. That didn’t help [and] made things a lot worse, but also everything that’s going on. It’s hard to be focused and have all your attention and efforts going towards winning the game when there’s so many things going on.”

Those aren’t words you want to hear from your young franchise quarterback if you’re a Jags fan, but that’s the reality right now.