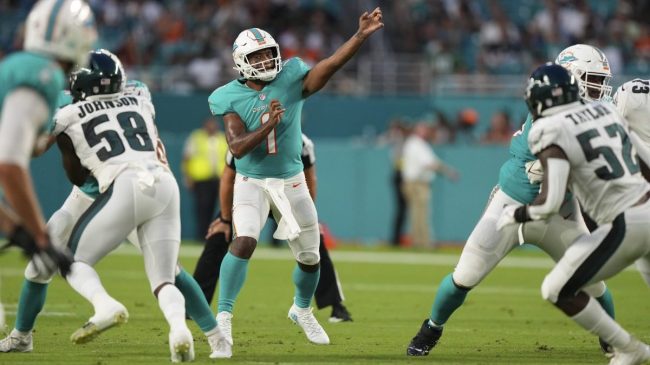 Tagovailoa has struggled in first two NFL seasons since the Dolphins selected him with the fifth pick in the 2021 NFL Draft. The Alabama product played in 23 games over his first two seasons, starting 21 of them. He’s thrown for 4,467 yards and 27 touchdowns in that span. But he’s also thrown for 15 interceptions, giving him a worse than 2-to-1 touchdown-to-interception ratio.

That doesn’t appear to matter to Hill.

Miami acquired the six-time Pro Bowl wide receiver via a massive trade with the Kansas City Chiefs in March. Since then, Hill has been Tagovailoa’s biggest hype man. He even went so far as to say that Tagovailoa is a more accurate passer than former teammate Patrick Mahomes.

That landed Hill in hot water. But he didn’t back down from the assertion. In fact, he doubled down on the comments in a later interview.

Even Miami head coach Mike McDaniel got in on the action, saying that Tagovailoa throws the “most accurate ball” that’s he’s ever seen.

Now it appears that they’re both being rewarded for their confidence.

Tagovailoa’s hard work in the offseason clearly didn’t go unnoticed by his coach and superstar wideout. But apparently they weren’t the only ones taking notice. His Miami Dolphins teammates voted the third-year signal caller a team captain for the first time on Thursday.

Miami Dolphins’ QB Tua Tagovailoa was voted a team captain for the first time in his NFL career, via @Marcel_LJ:https://t.co/iCWJcHBTiF

According to ESPN’s Marcel Louis-Jacques, Tagovailoa received more votes than any other player on the team. McDaniel told Louis-Jacques that the decision was a reflection the team’s confidence in its starting quarterback.

“I think it says everything. I think that’s incredibly important when it’s done with the right reasons and the right intent,” McDaniel said. “The only thing that I gave to the players was, ‘who do you want representing you each and every game, who do you want to wear the C and understand what that C means on your Jersey?’

Tagovailoa and the Dolphins kick off the regular season on Sept. 11 against AFC East rival New England.