UFC 239 Preview: Everything You Need To Know For The Biggest Fight Card Of The Summer 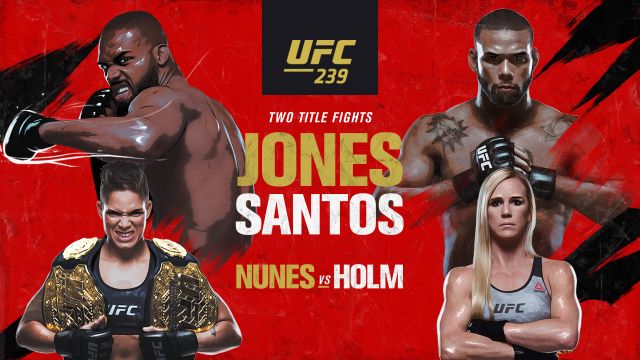 UFC 239, the tentpole event of this year’s International Fight Week is just around the corner, and MMA fans are hella hyped for this total banger of a fight card. On paper, the Pay Per View main card on ESPN+ is as stacked as any in recent memory. It’s a super card. It’s a mega card. It’s one you absolutely can not afford to miss.

With Jon “Bones” Jones and Amanda “The Lioness” Nunes attempting to make their respective marks as the greatest man and woman to ever step foot inside the Octagon, UFC 239, in particualr the main card, has something for everyone, from men’s and women’s title fights, to grudge matches, long awaited returns, and a champion vs. champion bout to open the Pay Per View portion.

And, if you’ve been following our pre-fight coverage at BroBible, you’ve already heard The Ultimate Fighter winner Michael Chiesa do a better job of selling the UFC 239 Pay Per View than anyone, save Holly Holm, whose penchant for timely head kicks should be enough to sway anyone on the fence.

However, for those still contemplating what to do on the evening of July 6, here’s a little more about each matchup on the UFC 239 Pay Per View main card on ESPN+.

At this point, calling Jon Jones the greatest MMA fighter of all time is no hyperbole. It’s a fact. He can do things that no one else on the planet can do. He’s the complete package: a dynamic striker, a crafty submission artist, and a total phenom unlike anyone who has come before him. And, at UFC 239, Jones will attempt his ninth defense of the light heavyweight title.

Having faced every possible style inside the Octagon, Jones has yet to lock horns with someone with the devastating power of Santos, who has more than a puncher’s (and kicker’s) chance to win the UFC 239 main event, but he’ll have to get to Jones early. Santos has absolutely nothing to lose in this bout, and often, those are the most dangerous fighters.

Whereas Jones has already cemented his place as the greatest of all-time, Amanda Nunes needs one more key win on her resume to stake her claim as the best woman to ever fight mixed martial arts. Having already won both the bantamweight and featherweight titles, with blistering knockouts over Ronda Rousey and Cris “Cyborg” Justino, Nunes has beaten every woman to ever hold a UFC title north of 115 pounds, save Holly Holm. It’s the final scalp remaining on Nunes’ hit list, and with her combination of punishing power and nonstop pressure, it could be a very short fight.

On the other side of the Octagon, Holly Holm knows a thing or two about taking out legendary champions. She’s the owner of the biggest upset in UFC history and a legitimate threat at any point of the fight. Having never been knocked out in MMA competition, Holm may, in fact, possess all the tools to withstand Nunes’ blitzes and rushes. Her command of distance can actually dictate the pace of the fight and frustrate Nunes, and, much like she did against Rousey, Holm can use her strategy to wear Nunes down before unleashing a devastating kick.

Now if any fight on the UFC 239 Pay Per View main card on ESPN+ has got fans talking, it’s most likely this grudge match between Jorge “Gamebred” Masvidal and “Funky” Ben Askren. Actually, the fact that this has evolved into a grudge match in such a short time is truly a thing of beauty, and the type of rivalry that can only be conjured up in the fight game.

Prior to March, Masvidal and Askren had no actual heat between them. That is until Askren flew over to London to call out the winner of a fight between Masvidal and former welterweight title challenger Darren Till. With Askren expecting Till to win that fight, there was little consideration that this matchup would actually materialize, but Masvidal managed to capture the MMA fanbase with a highlight reel knockout, followed by a backstage TKO and the snazzy “three piece and a soda” catchphrase.

Unlike the very serious Masvidal, Askren is essentially the light-hearted joker of the UFC. He’s one of the most accomplished wrestlers to ever fight in the Octagon, but outside of competition, Askren is an easy going guy with a wicked sense of humor. Still, he fights for a living, and he fights to win, and his wrestling is just so dominant that it’s tough to imagine how anyone can survive should “Funky” control the top game.

Making just his second walk to the Octagon, Askren has already become one of the most popular fighters in the UFC, and a win here could set him up for the next welterweight title shot, especially since he already has some heat with current champion Kamaru Usman.

One of the most creative grapplers in all of mixed martial arts, Rockhold also possesses punishing kicks, and his diverse and sophisticated MMA game took him all the way to a middleweight title. At UFC 239, Rockhold will make his maiden voyage at light heavyweight.

Will the move up a division pay off? Can Rockhold hold his own with bigger guys? And will he do enough to earn a future date against Jon Jones? All of these questions and more will be answered on July 6, but only if you tune in to ESPN+.

Conversely, Rockhold’s opponent, Jan Blachowicz, has been a steady force in the UFC light heavyweight division for closing in on five years now.

Mainly a kickboxer, Blachowicz is a formidable test for Rockhold’s debut at 205 pounds. Blachowicz has won a trio of fight night bonuses, and he’s intent on teaching Rockhold a lesson, and making him pay for what he perceived as a lack of respect by bailing on several UFC 239 media obligations.

Opening up the UFC 239 Pay Per View main card on ESPN+ are a pair of former The Ultimate Fighter winners.

For his part, Diego Sanchez appears renewed and refreshed in his most recent incarnation at welterweight. Sanchez, who changed training camps three weeks before UFC 239, recently delivered the most engaging interview of all the main card fighter during a UFC media day, teeter tottering from outrageous backstage stories to his signature death stare. He’s got that special brand of craziness that translates perfectly to MMA and the martial arts, combining a slick grappling attack with that Mexican style of boxing and nonstop action.

A grappler, a grinder, and “a dog” as he likes to call himself, Chiesa is making his second appearance at welterweight after climbing into the top-10 at 155 pounds. The move up in divisions has suited “Maverick” well, and it’s time to see if he’s ready to make a run at 170 pounds.

Chiesa is actually an ideal dance partner for Sanchez because of his gritty style. He’s not going to sit on the outside and look to land single punches. Rather, Chiesa is coming forward, looking to exchange and make the fight dirty before closing in for a takedown. Sanchez might box a bit more, but for both fighters, the objective is the same.

You Don’t Want to Miss This

Considering the depth, relevance, and complexity of the UFC 239 main card, this primer may, in fact, be a bit rudimentary, but you get the idea. This is one of those fight cards that’s worth making a night of. It’s a perfect complement to barbecues, and fireworks, and pool parties, and Fourth of July shenanigans. And the only way to catch all the action is on ESPN+.