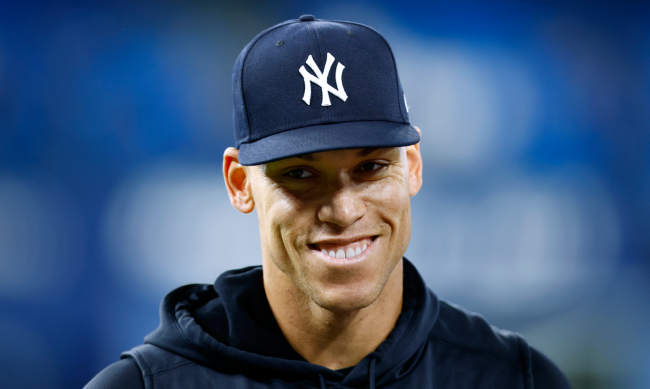 With the New York Yankees having a rare day off on Thursday, three of the team’s stars, Anthony Rizzo, Aaron Judge, and DJ LeMahieu decided to take in the New York Rangers’ playoff game against the Pittsburgh Penguins.

Naturally, with three of the city’s baseball stars in attendance at Game 2 of the Rangers’ first-round series, cameras quickly located the sluggers.

With their faces now up on the big board for all of the rollicking crowd to see, the three Yankees decided to slam what was left of their beers, much to the delight of the fans.

While none of the three players had what appeared to be a full beer, Rizzo looked like an absolute pro chugging the rest of his. This obviously wasn’t his first rodeo. Judge and LeMahieu, however, gave very Aaron Rodgers-like efforts with the rest of what was in their cups. (Rodgers famously went viral back in 2019 for his poor beer chugging skills at a Milwaukee Bucks playoff game.)

Fans had jokes about the Yankees’ beer chugging abilities

LeMahieu had the least and somehow finished last lmfao. Not surprised Rizzo finished first. People in Chicago are animals lol. Boozers like nowhere else I’ve been https://t.co/w3gEaBiunJ

This is DJs first time ever drinking by the looks of it https://t.co/zmjT0gGFoi

Dj after chugging that ounce of beer pic.twitter.com/0x2YWQDPKa

Back in 2019, after Aaron Rodgers’ poor beer chugging display, several other NFL quarterbacks were able to redeem their position in the sport by showing they had what it takes.

Things got so out of hand back then that Mike Greenberg even had legendary beer chugger Stone Cold Steve Austin on Get Up to provide some analysis of a few athletes’ abilities to rapidly drink a beer.