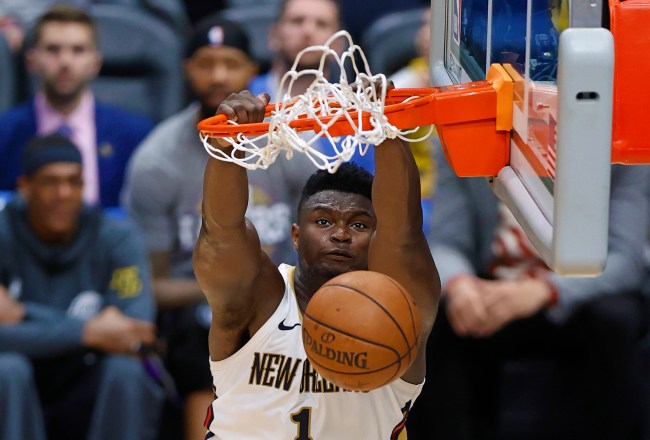 Never in my life will I understand the humans who drop exorbitant amounts of money on a trading card or a love letter not addressed to them or a used pair of panties (looking at you, Marv Albert).

But these people exist and will continue to spend a three bedroom home in Cleveland on a 3×5 piece of cardboard.

The latest example of this is a signed Zion Williamson rookie card that just sold on eBay for a reasonable $99,800 plus $3.85 shipping (lol eBay can’t help itself).

Zion Williamson card sells for nearly $100,000, assuming, and this is a big eBay if, the buyer pays it… and the shipping 🤷‍♂️ pic.twitter.com/W8jYpr6jJI

For reference, here is a list of things you can buy with the money spent on this card.

Ok, that last one is a joke. Kind of.

Zion is currently in the weeds of a lawsuit brought against him by his former agent, Prime Sports Marketing’s Gina Ford, who alleges that Williamson received “impermissible benefits” — such as money and other favors — in exchange for a commitment to play college ball at Duke. Ford alleges that Zion Williamson’s parents moved from a house where they were paying less than $900 a month in rent before their son played at Duke, to living in a $950,000 house that cost nearly $5,000 per month while he was a Blue Devil.

Zion will have no problem paying whatever to make this lawsuit go away, as the 20-year-old inked the second-most lucrative shoe deal by any rookie at five years, $75 million on top of his 2 year, $20 million contract with the Pelicans.