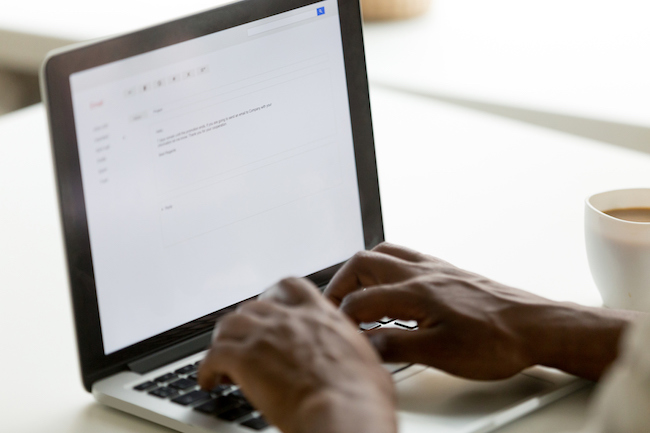 There’s a good chance you’ve fired off more than a few text messages and DMs in the time between waking up and getting to work.

How many of those messages involved the use of an emoji?

If you’re human, probably nearly all the texts.

Consider these insane stats about our love of emojis instead of words.

Emojis are commonplace in our everyday communication but should a person ever drop an emoticon in a work email?

Is It Acceptable To Use Emojis In Work Emails?

This question seems ironic considering emojis were explicitly created for a workplace.

The father of the emoticon is Scott Fahlman, a professor at Carnegie Mellon University. Fahlman proposed the use of smiley faces and sad faces back in 1982 in a text-only university online message board.

Fahlman felt his colleagues needed a way to convey when they were joking or being sarcastic to one another, which is much simpler than typing “I’m being sarcastic” every time.

Emojis became popular in Japan in the 1990s – the word literally means “picture character” in Japanese – and went mainstream in the US after being standardized by Unicode in 2010.

Now emojis are available on every smartphone, email client, and social media app.

A 2017 study published in Psychological and Personality Science reported that “people who use smiley faces in professional emails may be perceived as less competent.”

I’m not sure how competency can be judged by a smiling icon. Maybe the person is looking for a quicker way to convey feeling because they’re busy doing extra work while coworkers take surveys about emoji use.

Another study, this one conducted at Ben-Gurion University, also found that “including emojis in work emails can make you seem incompetent to your peers.”

“The researchers conducted a series of experiments that involved 549 participants from 29 countries.

In the first experiment, participants were asked to read a work-related email from an unknown person, and evaluated their competence and warmth.

While the content of the email was the same for all participants, some included smileys, and some did not.

The general feeling about emojis in work email is to use them sparingly, consider the overall message of the email, and the intended audience.

If you’re penning an email about quarterly losses, don’t drop in emojis of scissors and heads. If your boss is a constant curmudgeon, hold off on placing a beach chair and cocktail emojis at the conclusion of your time off request.

Dictionary.com also warns emoji users to think about the possible double meanings of emojis. Consult Emojipedia for a comprehensive explanation of every emoji.

And it doesn’t matter if the trendy new lunch place is called Eggplants and Peaches, spell it out when you ask your manager if she wants to grab a quick bite before the 1pm all-hands call.